The proprietor of the Los Crotos Posada-Restaurante on the south shore of Lake Chapala in the village of San Luis Soyatlan is staging the first art exhibition there in as long as anyone can remember. Conscious of the lack of a suitable public venue for an exhibition, Arturo Aceves has decided to open his business for a showing of works by seven well-known area artists on Sunday, September 11.

“Since there is no cultural center or appropriate municipal building here, I decided that it was time that the local population, especially the children, had the opportunity to experience art,” said Aceves. “Since my establishment has lots of walls, it could be just the place.”

The participating artists all lean toward the contemporary with great imagination, imagery and color reflecting their backgrounds and current environments.

Born in the small village of Tenamaxtlan, Jalisco, Cornelio Garcia currently resides in Guadalajara. He is a master painter, engraver, musician and writer, whose career spans more than four decades. His medium-sized engravings are lyrical and emotionally charged with childhood memories, disappointments and tragedies of love. 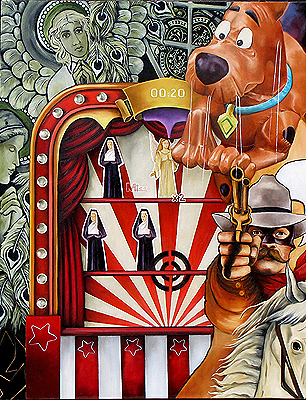 Kathy Seaboyer is a talented, self-taught artist from Nova Scotia who lives in Ajijic. Her paintings are whimsical and often humorous using oil and mixed media. She paints with a wonderful madness combining fantasy and realism with historical and political overtones.

Painter Antonio Lopez Vega is a product of the famed Neill James children’s art program in Ajijic. He studied at the Instituto de Allende in San Miguel de Allende, where he worked and taught for 15 years at the Centro Cultural Ignacio Allende, before returning to his native Ajijic in 2008. He is on the advisory board of the Ajijic Cultural Center where he gives workshops and courses on contemporary painting. His contact with Mexican indigenous communities has left a strong mark in his works portraying his interpretations of traditional folklore.

Jesus Lopez Vega, Antonio’s younger brother, is a self-taught artist. He is a full-time painter, print maker, sculptor and volunteer art instructor at the Lake Chapala Society’s children’s art program in Ajijic. His “Mexican Magic Surrealism” incorporates powerful renditions of the mystic and folkloric traditions of the indigenous communities and pre-Hispanic world of Lake Chapala.

San Juan Cosala native Isidro Xilonxochitl (often called “El Chivo”) is a painter, muralist, sculptor, engraver and art teacher who studied at the University of Guadalajara School of Plastic Arts. He is the founder of the collective art group “La Cueva” and is well known for his large mural showing the history of San Juan Cosala that graces the walls of Restaurante Viva Mexico in that town.

Pat Apt is originally from Maine but has lived in Ajijic for many years. She paints in oils but also creates etchings and linoleum block prints. Apt’s work is almost always figurative, playful and full of color but often with an undertone of seriousness sneaked in. Her work tends toward mythical and spiritual surrealism.

DePaul Durham studied painting and sculpture in the Fine Arts Department of Wayne State University in Detroit, Michigan. He worked for many years in commercial art studios and as an independent graphic artist before moving to San Juan Cosala. His art is a potent cocktail of symbols and hidden meanings (but not so hidden that you can’t find them) clearly influenced by his new cultural surroundings. DePaul carries on the Mexican muralist’s tradition of storyteller, provoking thought, commentary and controversy left open to the interpretation of the viewer.

The festivities opening the exhibition will begin at 3 p.m. and will include snacks and cocktails. Since space is limited, reservations for the opening would be appreciated. Call (376) 764-0067.