Veteran director Roseann Wilshere has put her own abilities of artistic improvisation to work on what she refers to as “an adaptation of a screenplay, adapted from the board game and adapted from the classic film “Murder by Death” adapted from “Ten Little Indians” by Agatha Christie. 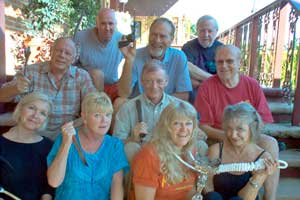 “No Clue, The Stage Play” adapted for the stage by Anne O’Neemus (and Wilshere) from Jonathan Lynn’s screenplay “Clue” will open on Saturday, November 5.

Six guests are invited to an English manor house (in Maine) and told that they must cooperate with the staff to solve a series of murders. Look for lots of blood, mayhem, various weapons (like the ones in the board game Clue) and comedy to find out “who-done-it” (or them).

Tickets for 200 pesos each go on sale Thursday and Friday, November 3 and 4, 10 a.m. to noon at the theater box office. The box office will be open at the same time during the run of the show (through November 13) and one hour before the 7:30 p.m. curtain. Season ticket holders who won’t be using their seats, or who need to change the date of their attendance should call the theater at 766-0954 and leave a message.

The full-service bar on the Angel Terrance opens at 6:30 p.m. It’s a great place to meet and greet and get into the mood for a great time.