Though it reportedly evolved through several adaptations, “No Clue, The Stage Play” showing at Lakeside Little Theatre from November 5 to 15, seems to have returned to its roots. The stylized acting, the color-coded characters and the bodies stacked like cordwood behind the library couch put one exactly in mind of the old board game Clue. 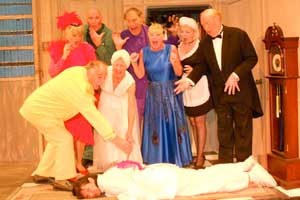 Clearly a spoof, adapted in its current reincarnation by Anne O’Neemus from Jonathan Lynn’s screenplay “Clue,” this production was directed by veteran Roseann Wilshere, who did a yeoman’s job taking the action to a “two-room” presidium stage, when she could surely have used a rotator. She did make it work and kept all of her cast in mind of going through the rooms and not through the (invisible) walls.

The script was standard “who-done-it” fare, with a gathering of characters all being black-mailed and all apparently capable of murder – especially in the requisite mansion with hidden passages on a cliff during an electrical storm.

The special effects were by Sandy Appelbaum and Richard Bansbach with the special sound design and operation by Emma Bergh-Apton. Brad Dobko and Zane Pumiglia designed the lighting that was operated by Sheila Dwyer. Besides her on-stage work, Gail Poppe managed the props along with her crew, Claudette Stevenson, Gail Footit and Joanne Bell.

Thanks everyone for sharing your talent.

LLT’s next offering, “Greetings,” by Tom Dudzick and directed by Peggy Lord Chilton, is well into rehearsals. The story is a heart-warming, funny play about a Christmas miracle. It will run from December 10 to 18.