There are no punches pulled in the Lakeside Little Theatre (LLT) musical production “A Taste of Broadway,” compiled and exquisitely directed by Barbara Clippinger, to be presented until March 6. 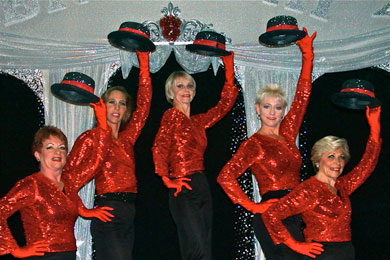 Amidst enough glitz and glitter to attract a planet and rhinestones in sufficient numbers to choke not just a horse but a whole herd, the talented cast swung into a well-paced program of familiar tunes from various shows on the Great White Way.

Patteye Simpson was the music coordinator and did a splendid job teaching the music and matching voices to songs. The menu for the “Taste of Broadway” had a lot of the “comfort tunes” like “Hello Dolly,” “I Could Write a Book,” “Maybe This Time,” “Embraceable You,” “Here’s That Rainy Day” and “What I Did for Love.” Some spicy stuff like “Tits and Ass,” “Don’t Tell Mama,” “Fugue for Tinhorns,” “You Gotta Get a Gimmick,” and “Razzle Dazzle” was stirred in to keep things on the boil, and the audience savored every one of the 32 bites.

Besides talented singers, from the chorus to the soloists, the show really resembled a true Broadway presentation in the energy and quality of its dancers– not an easy feat when casting from a retirement community. Alexis Hoff choreographed the show and put the dancers through their paces – if they ever missed a beat, no one noticed. 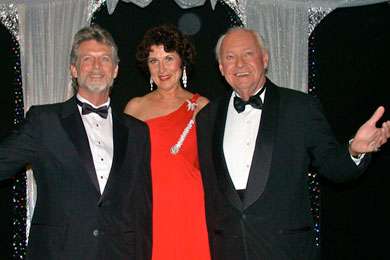 Picking out the high points in a production that moved from one pinnacle to the other is nearly impossible. But, those troopers Jeritza and Betty Lloyd Robinson were the real deal (rhinestoned tennis shoes and all) with “Bosom Buddies” and “I’m Still Here.” Val Jones, Helena Feldstein and Janet Lawson were dynamite in “You Gotta Get a Gimmick.” Patteye Simpson brought it home with each of her numbers and Mac Morrison still makes young girls (and some not-so-young girls) sigh.

Rob Stupple as “Broadway Joe,” whose comments about the numbers and shows from when they came brought continuity to the production.

Kudos to Clippinger for bringing on some great new talent to the LLT stage, including Janet Lawson, Leslie Martin, Val Jones, Don DeCarl, Lee Hitchcock, Catherine Gonzalez and Judy Hendrick. Each member of the cast stayed “right on” and demonstrated the hours of preparation required to produce a musical. 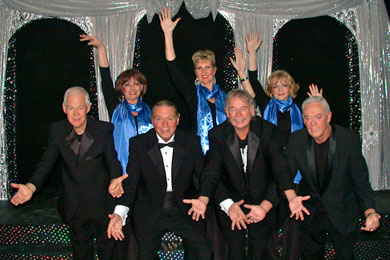 The stage manager was Diane Jones, assisted by Lynn Phelan and Rob Stupple. The artistic consultant was Flemming Halby and Win McIntosh, the production assistant. The dazzling set was designed by Russell Mack and Barbara Clippinger, and constructed by Alex Pinkerton and his crew, Richard Bansbach, Bryan Selesky, Russell Mack, Russell Moore, David White and Rick Bleier. The set was decorated by Tod Jonson.

Emma Bergh-Apton designed the sound and located and burned the back tracks. The sound was operated by Bergh-Apton and Karen Lee. Lighting design was by Zane Pumiglia, Brad Dobko, Sheilah Dwyer and Richard Roche. Light operation was by Dwyer, with Roche and Les Savari on spots.

Costume design was by Karin Eichier, Barbara Clippinger and Alexis Hoff with Karin Eichier as the wardrobe coordinator and Patsy Getchell as the accessories coordinator. Seamstresses were Heidi Schafer and Viola Jones. Dressers were Cindy Hitchhcock and Christine Bott.

Congratulations to everyone involved in this sparkling production.

Coming up at Lakeside Little Theatre as the last offering of the 2011-2012 (47th) season will be the comedy, “Sex Please, We’re Sixty,” by Michael and Susan Parker, with Pat Carroll directing. It’s set for April 7 to 15.