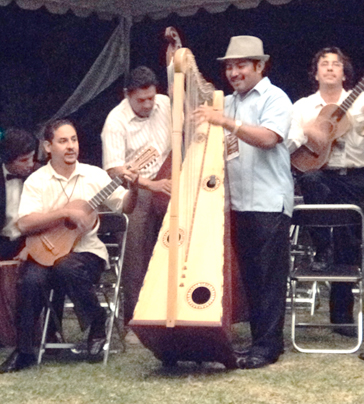 Lakeside music lovers will have a chance to soak in the traditional sounds of Mexico and Latin America during the ninth Encuentro de Arpas, Salterios y Mas from May 21 to 23.

The offbeat music festival will put masters of the Mexican folk harp into the limelight,  while bringing together scores of other instrumental and vocal artists for appearances at three venues.

Audiences will be treated to a huge repertoire of compositions in diverse genres, made up mostly of unplugged tunes.

The program kicks off Monday, May 21 with a musical marathon on the grounds of Chapala’s Centro Cultural Gonzalez Gallo (old train station), scheduled to start at 2 p.m. Different soloists, combos and orchestral groups will take turns on stage throughout the day and evening to perform their respective sets.

The event really loosens up after dark when individual artists begin mixing it up in an unstructured jam session that only ends when the musicians’ creative juices run dry.

Selected groups and soloists will perform again the following day at an open-air sunset recital slated in the La Vela plaza on the west end of Chapala’s waterfront Malecon.  The announced starting time is 7 p.m.

The aforementioned events will be open to the public free of charge.

The festival wraps up on Wednesday, May 23, 8 p.m., with guest artists appearing for a gala concert at the historic Teatro de Atequiza, located in the town of the same name. The handsome theater was built in the late 1800’s and reopened two years ago after extensive renovations.

Tickets for the performance, priced at 50 pesos per person, will be sold at the door. Proceeds will be set aside for social assistance programs benefitting needy inhabitants.

Atequiza is situated just off the Guadalajara-Ocotlan highway, approximately 10 kilometers east of the Santa Rosa junction that intersects with the roadway to Chapala.