With the goal of raising one million pesos achieved, the project to revamp the local auditorium (Auditorio de la Ribera del Lago) is charging ahead in leaps and bounds. 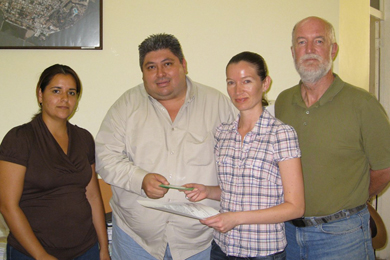 The focus of the project is to improve the acoustics and replace the aging electrical and air conditioning systems in the 35-year-old building in Ajijic.

Pro Auditorio, the organization championing the renovations, has spent the last two months coming up with blueprint designs for the project.

These had been delayed, says Pro Auditorio leader John Keeling, since their first priority was to raise the necessary cash to ensure matching funds from the state and federal governments (promises that have now been fulfilled, he adds).

“Fortunately, we have now raised slightly more than one million pesos and from the extra we are able to pay for engineers to design the new electrical and air-conditioning systems and the steel work for the infrastructure,” says Keeling.

Chapala city hall has provided the civil design without charge under the supervision of architect Enrique Rivas, director of planning in the Department of Public Works.

The whole package of drawings, specifications and cost estimates will soon be turned over to the Jalisco governmental department responsible for public tendering, choosing the general contractor and supervising the construction.

Pro Auditorio is expecting to continue fund-raising in the fall to fund parts of the project that could be installed separately, such as spotlights for the stage and certain components of the sound system.

Without any unforeseen glitches, the project should be finished by fall.  The auditorium will be closed for the summer months.

The Pro Auditorio design team is led by retired architect Thom Weeks, who prepared the original report two years ago, analyzing and making recommendations for improvements to the auditorium.

“His experience lies in the design of upgrades for many major concert and theatrical facilities in the United States and Canada,” says Keeling. “Local architect Barbara Castro has been assisting Weeks with the supervision of the other design contractors from the area.”

Keeling and his committee are excited about the work that will soon begin and thank all of the generous donors and all of those who helped with the very successful fund-raising events.