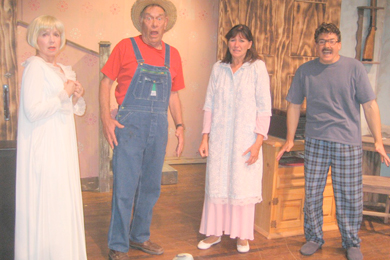 With hairpin turns, double twists and enough red herrings to grace a Danish smorgasbord, Lakeside Little Theatre’s “I’ll Be Back Before Midnight” kept the audience barely in their seats and loving every minute of it.

Director Roseann Wilshere, who clearly prefers the mystery genre (she’s directed several at LLT), outdid herself with this work of spooky kitsch.

She allowed the multi-layered characters to reveal themselves one veil at a time and kept the pace quick enough so that the horrific surprises arrived unannounced.

Her cast – Collette Clavadetcher as the neurotic and terrified wife, Ken Yakiwchuk as the supportive (or is he?) husband, Mark Bennett as George, the friendly (or is he?) farmer and Candace Luciano as the bitchy and incestuous (yes, she is) sister-in-law – all played their roles to the hilt.

The quality of the play was enhanced by the use of the original 1979 music sound track on loan from composer John Roby. There were lots of special effects, from exploding pot bellied stoves to protoplasm (or was it?) drifting through sheer curtains and bumps in the night. The effects all came off without a hitch, not an easy task in a small community theater. Compliments must go to special effects chair Alex Pinkerton and his crew, John Blackmer and Chet Beeswanger, as well as sound technician Emma Bergh-Apton, who enhanced the original track (this was Emma’s 50th LLT show) and Pierre Blackburn who operated the sound.

The stage manager was Diane Jones, who was assisted by Kathleen Morris and production assistant Richard Roche. The set design and construction was by Alex Pinkerton and his crew Richard Bansbach, Brian Selesky, John Blackmer and Chet Beeswanger. The set was decorated by Roberta Hilleman and painted by Margo Eberly, Dana Douin, Liz Nadoff, Diane Laris and Pamela Steed. Props were managed by Chet Beeswanger and his crew, Judy Long, Gail Footit, and Richard Bansbach. The director designed her own lighting that was operated by Zane Pumiglia.

Lois Cugini was in charge of the wardrobe, assisted by Beth Cathcart and Karin Eichler. Maxcine Tate and the Season 48 make-up team did the make-up.

Congratulations to the cast and crew of this striking production.

Next up at LLT is “Best Wishes,” by Bill Barker, directed by Peggy Lord Chilton, opening December 8.