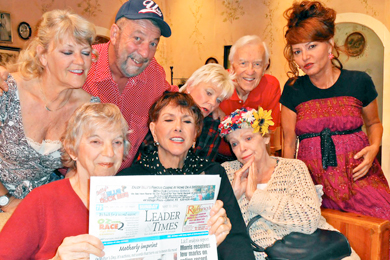 Lakeside Little Theatre (LLT) went out on a limb to stage what was billed as a “drama with lighter moments” in Bill Barker’s “Best Wishes.” The play is just one step ahead of a vignette of glimpses into the interaction of the siblings of a large family, some of whom have returned to their Kansas roots for the funeral of their mother. Each of the characters comes with his or her own perspective of the truth of family life and baggage filled during what appears to have been a difficult and dusty Kansas upbringing. From the get-go it appears that few of the siblings enjoy the company of the others (some even refuse civil greetings) and now, the thread that held them together has gone to her reward.

Director Peggy Lord Chilton allowed each of the characters to remain alone and inviolate in his or her grief and to act out the angst without regard to its effect on the others.

Ken Bridges brought subtle definition to his role as the family’s eldest and Kathleen Morris was as smooth as ‘Mama’s creamed chicken’ as the family ‘people pleaser.’ Judy Long as the family’s youngest played it petulant, pouting and irritating as many coddled family youngest are perceived by their siblings. Zane Pumiglia was real as the “good ‘ol boy” brother who had never really left.

Some special kudos need to be sent to Georgette Richmond, not only for the skill with which she attacked her role as the “first college educated in her family,” but also for the sterling work she did adding glue to the rest of the cast, even moving to keep them on stage cues. Wendy Hamblin, a relative new-comer to LLT came into the play late as a replacement and held her own.

A couple of bright spots that really lifted the mood were the entrance of K.A. Tetrault as the very pregnant and precious Mrs. Newhart and her husband and sugar daddy played by LLT veteran Harry Walker. Betty Lloyd Robinson played Mama’s lifelong friend “Fanny,” who sang with gusto and a vibrato big enough to tunnel a semi and gave something of an insight as to who “Mama” really was.

The lighting design was by Pierre Huot and the lights were operated by Norm Whelpdale. Karen Lee designed the sound that was operated by Rick Tetrault. Wendy Hamblin and Lorne Hamblin were in charge of the wardrobe and Maxcine Tate, Christi Wiseman and Julie Mignard were the make-up artists.

This reviewer opened this piece using the words “out on a limb” to imply a certain risk the community theater took in staging “Best Wishes.” LLT audiences have proven time and again that they are not partial to plays dealing with death and dying. So, congratulations to LLT and the cast of “Best Wishes” for their bravery.

“Too Soon for Daisies” by W. Dinner and W. Morum, directed by Sally Jo Bartlett, is well into rehearsal and will take the stage from January 12 to January 20.