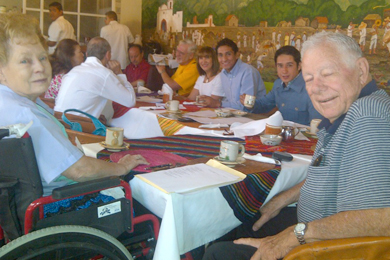 The newly formed Orquesta Filarmonica Infantil de la Ribera de Chapala (Lakeside Philharmonic Youth Orchestra) will make its debut on Saturday, May 18, 7 p.m. on the Ajijic plaza. The ensemble, operating under the umbrella of Golden Strings of Lake Chapala, is made up of interested and talented kids from the Lake Chapala area aged between 8 and 18. Directing the orchestra is youthful (21 years old) Daniel Medeles.

The group is supported entirely by private donations. Some of the youngsters are from families who can pay for their music lessons and instruments but many otf he others need financial help.

The orchestra’s philosophy and methodology is modeled on Venezuela’s innovative “El Sistema” program that seeks to transform the lives of children through music. The teaching draws from the famous Suzuki method, wherein students are taught real melodies from the beginning of their studies, rather than the less interesting pursuits of simple scales.

The orchestra will eventually feature the full panoply of strings, brass, woodwinds (except saxophones) and percussion.

Like “El Sistema,” this is not a charity initiative but a social rescue project, opening windows of opportunities for children living in the villages around Lake Chapala.

To donate money and/or instruments or to get more information about this project contact Marvin Harthcock, president of Golden Strings, at (376) 763-5093.