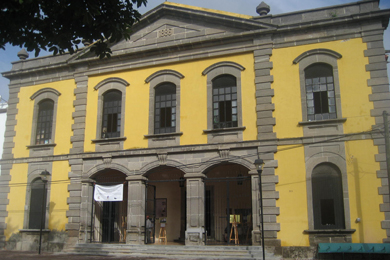 A gala concert entitled La Bella Epoca de Mexico Romantico will be staged Saturday, November 16, 7 p.m. at the stately and historic Teatro de Atequiza, located in the eponymous town that lies on the eastern boundary of Ixtlahuacan de los Membrillos.

The program will feature soprano Iraiz Martinez and tenor Marco A. Lozano performing a repertoire of classic Mexican songs accompanied by violin, cello and piano.

The Teatro de Atequiza was inaugurated in 1886 as a cultural focal point of the vast hacienda that stood out as the region’s agricultural and commercial center through the colonial and pre-revolutionary eras. The building was abandoned in the immediate wake of the 1910-1920 Revolution. In later years it was occupied by educational institutions.

The theater was fully renovated and reopened for public events three years ago in conjunction with the Independence Bicentennial and Revolution Centennial celebrations. The building also houses the town’s Biblioteca (library) and historical archives.

Admission to the concert ranges from 150 to 350 pesos, depending upon seating choice. Tickets are now on sale at the Biblioteca, open Monday through Friday, 10 a.m. to 1 p.m. and 4 to 7 p.m. Organizers hope to arrange for a ticket outlet in the Chapala area in the coming week. In the meantime, reservations may be made by contacting  Maria Carmen Martinez at (01-33) 3330-6816, cel. 333-455-2979 or email This email address is being protected from spambots. You need JavaScript enabled to view it..