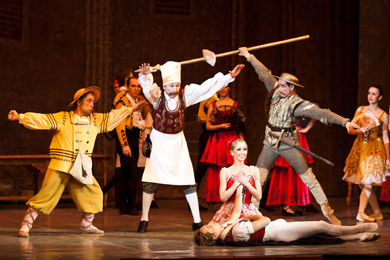 Ballet aficionados have been enjoying “Don Quixote,” this year’s Russian State Ballet Mari El’s tour, at locations all over Mexico since September 29. The company’s month-long schedule comprised 20 performances at venues including Guadalajara, Mexico City, Queretaro, Acapulco and Ajijic. Returning to Russia on October 29 it has only a short turn-around before taking “The Nutcracker” to Germany in mid-November.

The Republic of Mari El, a federal subject of Russia, is located on the East European Plain beside the Volga River. Founded 45 years ago, the Russian State Ballet Mari El belongs to the Opera and Ballet Sapaev. One of the oldest in Russia, it is based in the capital, Yoshkar-Ola.  Dancers are drawn from major ballet schools and the company is ranked as the best ballet of the new Russian generation.

Although the company travels extensively nationally and world-wide, an international tour like this takes approximately six months to organise. Major problems can arise which require resolution, such as changes of event dates or locations, booking accommodation and obtaining performance (work) visas and other official paperwork.

The logistics of moving a company of some 30 people plus hampers of show costumes, full-sized backdrop and other essential equipment the 6,728.87 miles from Mari El to Guadalajara are complex. The company and its luggage fly from Russia and then the Chapala-based promoter of the Mexico tour, Kovac Promociones, provides a large bus to transport everyone and everything across Mexico to each performance location.

With an extensive experience of setting up venues and problem-solving, remarkably this task only takes four to five hours. First the technicians set up and check lights and sound, then the rehearsals for that night’s performance of “Don Quixote” begin.

Derived from the novel by Miguel Cervantes, “Don Quixote” is one of the most popular classical ballets. Ludwig Minkus’ music is lively, passionate and rich with Spanish dances. The choreography of Alexander Gorsky and Marius Petipa is charmingly brought to life by acclaimed choreographer, stage manager and artistic director Konstantin Ivanov, a former soloist of the Bolshoi Ballet and artist emeritus of the Russian nation.

The Ajijic Auditorio audience was soon chuckling at the antics of Sancho Panza (Vladimir Shabalin, head of the ballet company) and his po-faced master, the tall, sartorial, spear-wielding Don Quixote (Ivan Melekhin) who strode about tilting at windmills, as the story unfolded.

The action was smoothly fast-paced, exciting and colorful. The dancing of principals and corps de ballet was, without exception, exquisite. Most endearing and very noticeable were the happy expressions on the entire company’s faces throughout, which immediately set and held the tone of the entire evening. The only noticeable omissions – unsurprisingly – were Rocinante and Panza’s donkey.

Prima-ballerina Olga Chelpanova’s Kitri and Principal Dancer Konstantin Korotkov’s Basil nearly brought the house down with their superb grandes jetées at the end of Act I, when the pair run away to escape her father. All the Principals’ timings were impressive – particularly when entrance and position preceded the music, demanding great accuracy.

The costumes were beautiful and color coordinated, creating most appealing images with every change, particularly during the cloak dance where Kitri pirouetted down a line of cloak-swirling bull-fighters at high speed, creating an eye-catching storm of red, to deafening applause which rendered the music inaudible.

The entire production was extremely well received and this was reinforced by the extended standing ovation at the final curtain.  The company has been nominated three times at the Lunas del Auditorio award ceremony, Mexico City, as the best ballet of the year for its presentations of “Swan Lake” and “Romeo and Juliet” in earlier visits. We look forward with great anticipation to their next one.