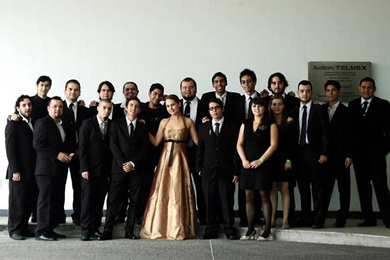 A surprisingly small audience at the Auditorio de la Ribera gathered for the concert of the Big Band Jazz GDL on December 15. It is difficult to know whether the low turn-out was due to the early (noon) start, it being a Sunday, or to the show being in competition with the many other events taking place at Lakeside over the festive season.

The Big Band was born as an experimental workshop in 2009, when University of Guadalajara musician and teacher Juan José Valdivia invited students from all disciplines across the institution to join him. For his initial musical selection he chose a small collection of musical works from the wonderful era of the big bands of yesteryear.

With a vastly increased repertoire, the Big Band has performed in multiple venues since 2011: the main square of El Salto, the Casa de la Cultura in Chapala and the University of Guadalajara Music School, as well as Guadalajara’s San Jacinto Park, Instiuto Cabañas, Plaza de la Liberacion and Museo de las Artes, amongst many others.

Since its inception the group has gone from strength to strength and now there are 18 members representing both alumni and current undergraduates.

This performance at the Auditorio was sponsored by the Chapala municipal government. Luce Maria Mendoza Huerta, Chapala’s culture director, gave a brief address to welcome the audience and introduce the band, followed by a few words from Yolanda Martinez, head officer of the Chapala Branch of the Guadalajara Chamber of Commerce.

Sadly, persistent sound issues seriously detracted from the excellent performance of the band. Excessive over-amplification throughout caused auditory distortion and was far too loud for comfort at 104 decibels. The cause of this unfortunate problem is unclear. Perhaps it was due to the limited amount of “set-up” time between the band’s arrival and the audience being seated. However, the sound levels could, and should, have been corrected.

Cassandra Rodriguez was a delight. An extremely attractive and talented singer, her interpretations of “Autumn Leaves” by Mercer and Rodgers and Hart’s “Blue Moon” at the end of the the first half were exceptional, as evidenced by the audience response.

The second half opened to a lively interpretation of “Tank” by Yoko Kano.  A.J. Ellis’ “The Chicken” included an accomplished guitar solo but, again, the audience was denied full enjoyment of this particular interpretation because the volume was set too high.

Rodriguez returned to close the show with a moving performance of Howard’s “Fly Me to the Moon.” This was followed by “Big Spender” written by Cy Coleman and Dorothy Fields for the musical “Sweet Charity.” Petite Rodriguez’s definitive and surprisingly powerful delivery was certainly a strong contender to take on Shirley Bassey and Peggy Lee’s cover versions and concluded the concert in style. The subsequent orchestral encore was an unexpected bonus.

Sound problems aside, the members of the Big Band GDL are clearly young and very talented musicians, who are noted for their devotion and dedication. Four years on, since Valdivia’s “experiment” began, the results are self-evident and I look forward to many more performances from Big Band GDL.