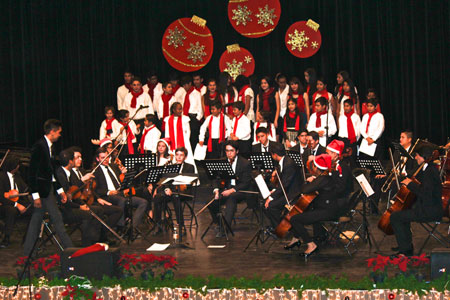 At the Ajijic Auditorio on Thursday, December 19 there was great excitement and standing room only for some, even though additional chairs were brought in. People turned out in droves for the CREM (Centro Regional de Estudios Musicales) annual “Concierto de Invierno,” featuring the Orquesta Víctor Manuel Medeles and the Orquesta Infantil y Coro del CREM.

Conducted by Emmanuel Medeles throughout, the program opened with a beautiful performance of Handel’s “Sonata for Flute in F major” by Esteban Oetling on recorder, accompanied by Hans Aull on piano, followed by three pieces from a lively and versatile string quartet comprised of three violins and a cello.

Then CREM children’s choir was joined by that of the University of Guadalajara Music School for an enjoyable rendition of Geisler’s canon “La Orquesta.”

Orquesta Infantil del CREM, whose youngest musician is about seven years old, then entered. After an amusing and quickly resolved dispute over chairs from a petulant small cellist who felt he deserved a more prominent seat, the performances of “Sahara Crossing,” “Jane and Josey” and “El Niño del Tambor” were very well received.

First violinist, Maura Ramos van der Hoek’s spontaneous “high-five” with conductor Medeles at the conclusion of the first half, was appropriate and appreciated by all.

After the intermission Norma Kishi and Heather Cogswell welcomed the audience in Spanish and English and talked about CREM’s work, before introducing the Orquesta Víctor Manuel Medeles, named after its founder.

“Aus Holbergs Zeit Op.40” by Edvard Grieg was magnificent. The all string performance of the Präludium, by 12 violins, three cellos and a bass, was lovely and mellow with a great pace. The Sarabande followed by the Gavotte, Air and Rigaudon were all much enjoyed and over far too quickly.

Clarinet, drum, trombone and piano players then rejoined the orchestra, together with the choirs, for Spanish and English versions of “Jingle Bells,” “Blanca Navidad,” ‘Pobre mi Burrito” and “Feliz Navidad,” which were such fun it was hard not to join in.

Such was the applause and demand for “more” that, amid beaming smiles, the entire ensemble sang an encore. After which, the organizers had to turn up the lights to convince the audience that the show was over.

CREM, Ajijic’s not-for-profit music school for children and youth, was founded by the late local musician and composer Víctor Manuel Medeles in 1990.  His son Emmanuel, the conductor, took over as director four years ago.

All the children attend weekly musical theory and private lessons on their instrument of choice and join one of the orchestras, choirs or ensembles. CREM’s youth orchestra is so professional it was invited to play during the 2011 Pan-American Games in various parts of Jalisco.

The school has some 55 students, aged from four to 22 years old and no child is ever told stop attending because of an inability to pay fees. As a result sponsorship is essential.

Currently, 15 students are from lower-income families, so only the sponsorship from members of the Ajijic community, enables them to pursue a musical education.

Sponsorship works well. Instead of the student paying the monthly fee of 300 pesos, a sponsor is found from the Lakeside community. This can be a single individual, or friends getting together to help. Sometimes a child only needs half a scholarship.

A strong supporter of CREM, ¡Viva Musica! also sponsors young musicians and makes donations direct to the organization each year. The Music Appreciation Society (MAS) too was a supporter and, when it closed, a lot of equipment was passed to CREM, including the magnificent grand piano used at the concert.

All the teachers began their musical careers by attending CREM as youngsters. Now they are graduate musicians from the University of Guadalajara, three of whom play in the Jalisco Philharmonic Orchestra. They all clearly believe that Víctor Manuel Medeles and CREM have changed their lives and their dedication to the project is self-evident.

CREM’s fundraisers include concerts and other entertainment. A new source of income is its recycling project. Six months ago, students, parents, teachers at CREM plus friends from schools, offices, etc., began to collect wrappers from chips, cookies, bread, toothpaste and other things, which are boxed and sent to the “Terracycle” company each month.

So far CREM has earned 10,000 pesos, which is the equivalent of almost three scholarships, and anyone able to help will be most welcome. For more information contact This email address is being protected from spambots. You need JavaScript enabled to view it..

Margrita van der Hoek, of the advisory committee, sums CREM up very well. “Personally, I love this school because I feel it is such a fun, healthy, stimulating environment for children,” she says “They make many friends and it is a place where socio-economic background does not really matter. What binds them together is their love for music.”