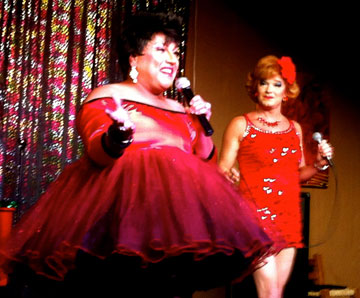 OK, I’ll admit it. I’d never had the opportunity to see a drag show, nor visited el Piano Rojo before but I definitely picked the right opportunity to remedy this.  It’s been a very long time since I laughed so often and so hard that I awoke with aching ribs the next day.

The pair first met when they were working a venue in Puerto Vallarta. It was there that they decided to team up to create this wacky and unforgettable show.

Consummate and gifted artistes, they also have an innate ability to create and sustain an immediate rapport with their very diverse audience, which they use to great comedic advantage.

El Piano Rojo is a perfect venue for their show. It is very intimate and exceptionally comfortable, with little tub armchairs, a small stage that contains the bright red piano for which the bar is named.

With live songs only – and absolutely no lip sync – content varies every night and is constantly evolving. On the evening I was there, Chi Chi and Joanna treated us to extraordinarily accurate impersonations of Bette Davis, Eartha Kitt, Judy Garland, Adele and Billie Holiday.

The Karen Carpenter vs. Mama Cass duet reduced the audience to hysterics and halted the show for several minutes.

What marks out their performances from other impressionists is that they sing the songs in the same pitch as the originals, which can’t be easy. This, together with exceptionally accurate mimicry of the relevant star’s pronunciation, makes the overall result uncannily realistic and much appreciated by the audience.

Exotic glittering dresses and shoes, combined with umpteen fabulous wigs, were donned and discarded in multiple rapid costume changes during this superb show.

Most women in the audience must have experienced some degree of envy, if not at the clothing, certainly at Joanna’s face or the fact that Chi Chi Rones definitely had the best legs in the room!