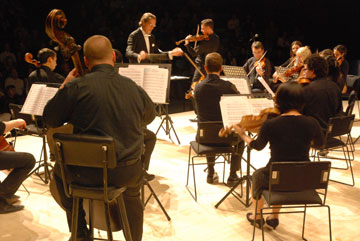 Plans are well advanced for the 11th annual Scotiabank Northern Lights Music Festival, which will take place in various Lakeside locations between February 17 and March 1.

Festival founder and Artistic Director Chris Wilshere says the packed program of 16 concerts in 13 days “would not be possible without the wonderful support of Scotiabank and the outstanding Lakeside community.”

Last year’s festival was a great success and, as a result, it was possible to bring one of Canada’s top violin luthiers and restorers to work on more than 50 violins, cellos and violas of young Lakeside music students and those of the Orquesta Axixic.

It also facilitated awards of over 50,000 pesos’ worth of scholarships to young Lakeside and Guadalajara music students.

The festival’s declared mission is “to present a classical and jazz music festival annually in the Lake Chapala region, featuring high caliber young Canadian and international musicians, to support the development of upcoming Mexican classical musicians and to increase appreciation and awareness of this style of music ... We work to deliver on our Mission by giving master classes and private classes to upcoming Mexican classical musicians (primarily during Festival time annually and by providing scholarships for students to continue their musical studies.”

In a departure from the norm, there will be two “not-so-classical” concerts this year. On February 20, double Juno award winner and five-time nominee, Richard Underhill and his band, return to Ajijic with jazz singer Terra Hazelton.

Special guest Tracy Silverman, who BBC Radio describes as “the greatest living exponent of the electric violin,” will perform on February 23 on his six-stringed electric violin. Known as the violin’s newest rock star, Silverman has already performed solo at Carnegie Hall to rave reviews.

There are many other treats in store, including Schubert’s “Trout Quintet” with Jamie Parker on piano and Wilshere on violin.

Ariel Barnes, principal cellist for the Vancouver Symphony Orchestra, will perform Haydn’s “Cello Concerto in D Major.” This will be followed by celebrated recording artist and renowned international flautist Susan Hoeppner who will be playing Gustav Holst’s ‘Fugal Concerto.”

The Scotiabank Northern Lights Festival also delivers on its mission by giving master classes and private classes to upcoming Mexican classical musicians – primarily during annual festival time – and by providing scholarships for students to continue their musical studies.

Five young musicians on full scholarship at the University of Guadalajara will be performing at the festival this year, and some will be participating in the Rising Stars concert on February 28.

For full information about all the events on the festival program, or to become a patron, visit www.scotiabanknorthernlightsmusicfestival.com.