When Rebecca Roth started a doll-making workshop inside the women’s section at the Puente Grande state penitentiary 11 years ago, she never imagined the dimensions the project would reach beyond the prison’s walls. 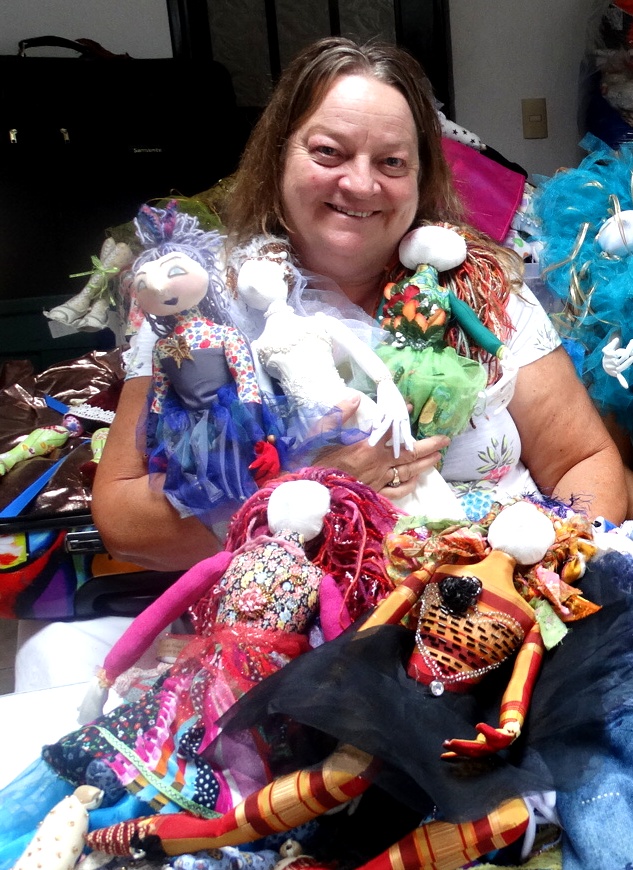 As she prepares to take the initiative to the next level under the sponsorship of Chapala’s Culture Department, she has accepted an invitation to exhibit samples of her Original Friends brand this weekend at the waterfront Malecón.

Her stand will be set up at the east end of the boardwalk next to the copper pot fountains standing near the Palapa del Guayabo seafood restaurant. The display is scheduled to be in place Friday, November 8 through Sunday, November 10, 10 a.m. to 5 p.m. It will showcase a selection of the fanciful one-of-a-kind dolls hand-crafted both by imaginative Puente Grande inmates and equally creative local women who have taken up the needle in the offshoot workshop Roth launched last year in cooperation with the Lakeside Presbyterian Church.

Roth is an U.S. citizen who spent four years behind bars at Puente Grande while battling trumped-up criminal charges linked to her employment by Alyn Richard Waage, a Canadian con artist who ran a notorious Ponzi scam out of Puerto Vallarta. While incarcerated she obtained permission to run an occupational workshop and income-generator for fellow female prisoners. Eventually vindicated, she has maintained the leadership of the Original Friends workshop from the outside since her release in March 2010.

After hitting a stumbling block with prison authorities last year, she set up a local women’s cooperative to produce a “next generation” line of the dolls fashioned from recycled fabric scraps and decorative materials. The prison workshop is now back on track, while the lakeside cooperative thrives.

Roth’s work recently caught the attention of Chapala Culture and Tourism Director Gastón de la Torre. Keen to promote what he labels “productive culture,” he has pegged Roth to spearhead a textile workshop program aimed at training women to produce assorted hand-crafts to be sold in local and export markets.

Enthused by the prospects, he has already acquired five sewing machines, with the aim of getting the project rolling by the end of this year.  This weekend’s Original Friends exhibit marks the start of a promotional campaign to attract potential workshop participants, project supporters and buyers.