The traditional heart of the Chapala area’s annual Carnaval festivities is buried in the gritty earth of local bullrings. 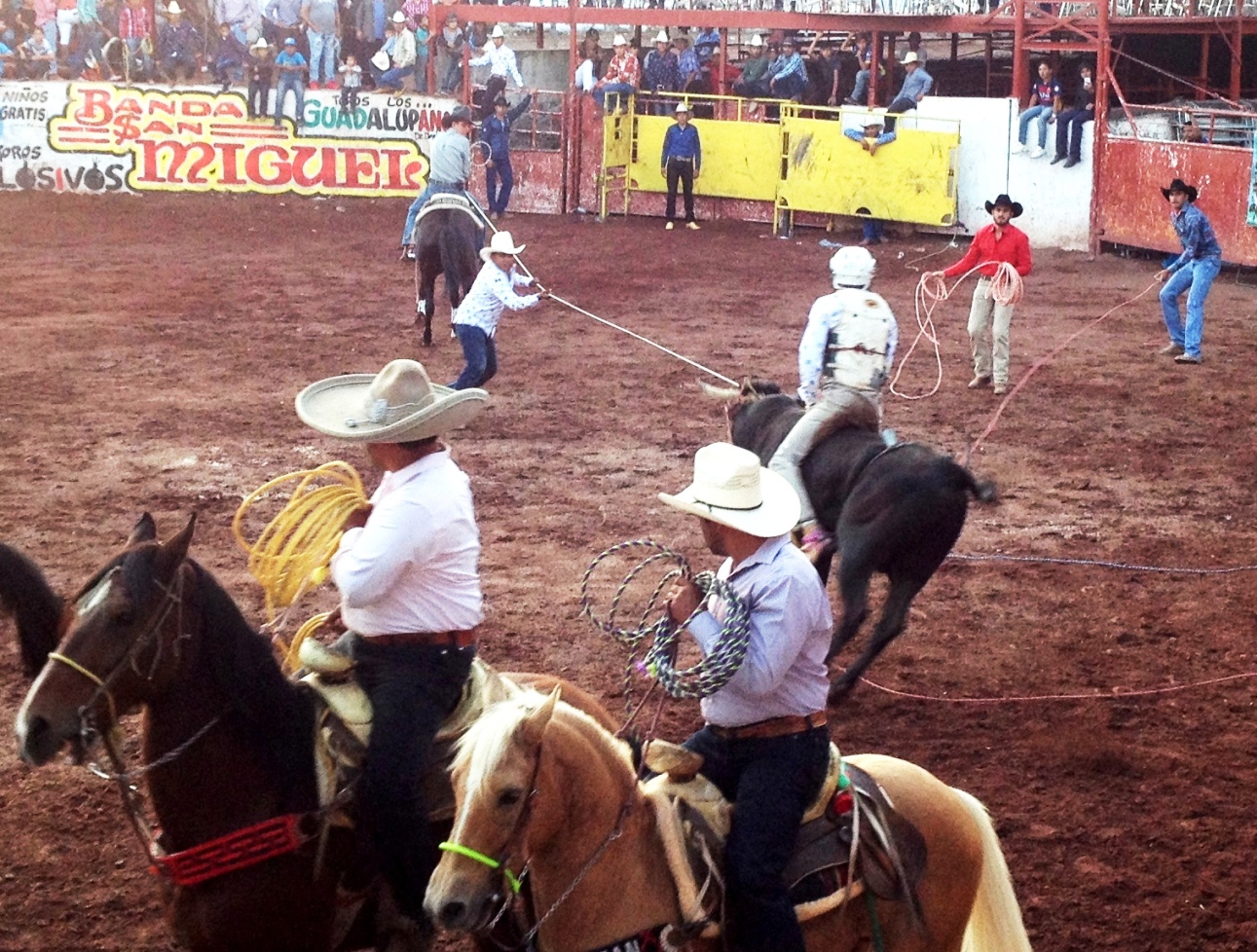 They are the ground zero spots for las fiestas taurinas, a.k.a. in the popular vernacular simply known as los toros. These rough and tumble cow-poking events taking place throughout Carnaval season are the main attraction for many common people. They are loud and rowdy happenings that I have pretty much avoided as old age has set in, reducing my tolerance for noise, confusion and alcohol consumption.

This week I finally caved to prodding from my offspring. On Monday evening my Mexican born daughter, granddaughter and yerno (son-in-law) dragged me off to Chapala’s next-to-last jaripeo. And despite my worst expectations, I actually savored the experience.

The jaripeo is not the same thing as a charreada, not even close. And it’s not a Mexican style rodeo either. It is simply a fairly loose-knit bull-riding and roping event wrapped inside a prolonged dancing and drinking party powered with banda music.

We tramped into the lienzo arena and settled ourselves into the bare-bone stands, directly facing the slowly sinking afternoon sun.

The shady side of the bullring was packed to the hilt. But after a half hour or so that fiery ball burning my eyeballs had disappeared beyond the horizon, permitting comfortable viewing of spectacle in progress. The bill featured fierce bulls brought in by ranchers from the far side of the lake.

Jaripeos involve a lot of waiting between each bull ride. But a couple dozen horsemen kept the action going, showing off skills at making their mounts twirl, prance and dance around ring, in beat with the live band blasting tunes from the adjacent stage.

Meanwhile, the audience and riders were pounding down brewskies and full bottles of tequila to fuel the festive mood.

After a 20- to 30-minute pause, a bull was coaxed into a tight box behind a metal gate, as its jinete (rider) appeared, getting down on hands and knees in the dusty earth outside the gate for a pre-performance ritual. Then he climbed over the railing to get on the bull.

The gate burst open, releasing man and beast for a wild ride round and round the ring. The rider’s objective is stay aboard until the bull stops bucking so he can jump to the ground and land on his standing feet in a dignified dismount.

Most of the riders I saw didn’t fare all that well, getting thrown off within seconds. One got stomped on by the bull and had to be hauled off to the Red Cross for repairs.

A little later the cowpoke clowns who do cover work in the ring did laps around the stands, passing the hat for donations towards the poor guy’s medical expenses.

A man from the audience also got trashed when he jumped into the ring waving his fancy cowboy hat in the face of a lose bull.

Shortly after dark, the bull riding ended and horsemen retreated. The crowd of spectators swarmed into the ring for a late night of dancing with the headline band. That made it a wrap for me and my clan, contented to head home after getting into the real spirit of Carnaval Chapala-style.