Horses. When living in the United States, my wife and I planned to come to Mexico early in 1960. I had encouraged some Army buddies to come to Los Angeles, after mustering out – where I’d lived before my induction.

Some did, and then I suggested that our next step should be Mexico. I had an older friend who taught writing at the University of Southern California, where I had earlier gone to school. He was an Army veteran, and before his time at USC, had been living in Ajijic, in the company of other U.S. vets who were not yet ready to come “home.” He had just published a book of short stories and I early on read the book’s leading and much-applauded short story set in Ajijic.

He criticized and worked with me on fashioning a series of short stories. He planned on leaving teaching when the semester ended, and encouraged me to look at Ajijic as a place to live in Mexico. We planned to meet there as soon as he left teaching.

My wife and I drove quickly from L.A. to Ajijic. As I took a left turn off the battered {carretera}, we were impressed by the pueblo’s empty main entry: the sharply downhill, and totally empty Calle Colon. I was headed for No. 12 Calle Ocampo, which had just been renewed by an American painter who was returning home.

Few Ajijic Mexicans had vehicles at that time. They had burros and, especially, horses.

My wife and I had been living on Malibu beach where she taught high school. I taught horseback riding and surfing, and wrote early in the morning.

During the first weeks in Ajijic, every time I heard a horse coming down Calle Ocampo, which was a main street then, I looked out the window. Soon I became acquainted with owners of impressive-looking — and pricey — animals. My wife and I exercised a couple of horses for a wealthy and unusual gringo. But it wasn’t until we met Jocotepec photographer John Frost and his wife that I began spending serious time dealing with Mexican horses.

John spent a lot of time with folks who lived in small pueblitos located in vast wide-open and somewhat distant fields then surrounding Jocotepec (which was small, and called by residents simply “El Pueblo” as they seemed rather over-readily to admit its corruption), among other villages. My wife was proof-reading for the owner of the Reporter, and I reported Lakeside stories for the paper. I bought a good, well-priced camera from a North American returning to Chicago, and began learning to do darkroom work for John, while he explained the most productive photo techniques. And his interest in distant, small – yet inviting – lesson-teaching pueblitos. 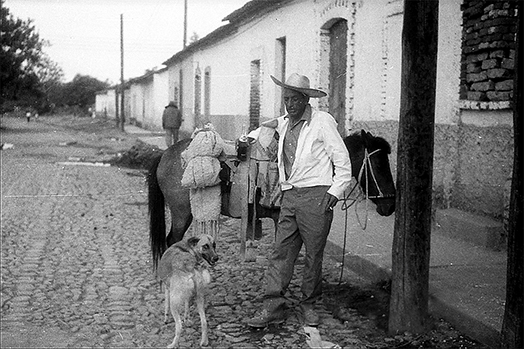 Meanwhile, rumors were filtering downhill – north to south – that some folks active in equine zoological studies were digging into the world’s historical fossil records. Deep, hard-headed digging into what they called, “the family Equidae.” And coming up with evidence that horses occupied northern Kazakhstan beginning about 36,000 B.C.

The early reports were dubbed by many readers as almost undecipherable statements, but ones that got the attention of many experts of the world’s equine past. The experts – in the United States, Europe and elsewhere – were talking about “Equus species” worldwide.  That got some attention because it referred to a number of extinctions of North American mounts. Such experts indicated prehistoric North American horses originally had died off between one million and two million years in the past. It seemed that the North American species died, then eventually came back, only to disappear again,1.7 million years ago. 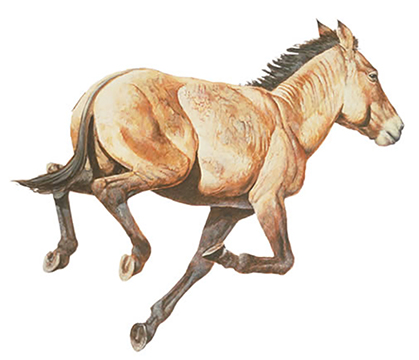 North America, experts now say, ended up with a vigorous breed of escaped Spanish Conquistador mounts. This was somewhat similar, some historians said, to its rebellious – and successful – revolutionary, freedom-loving government.

(This is the second of a series)