Mexico has caused quite an excitement here with its recent showing in World Cup Soccer, enhancing a world record for advancements into the Group of 16, the finals – and beating out the record-setting political assassinations in Mexico for media ratings.

A version of the game has been around a long time in many areas of the world. Mayans had a strange version where they used only their hips to knock a ball through a vertical hoop above their head (a combination of soccer, basketball and the mambo). It was a game that never caught on, because nobody ever scored. The emperor declared the winning team based on which team lost the fewest loincloths.

Another soccer-like game I just recently witnessed in Florence, Italy is called Calcio Storico, another game that never caught on outside of Florence, where it is played each year on the feast of San Giovanni (The Baptist). Two teams, dressed in Renaissance garb, play a soccer\rugby\dodgeball sort of scrabble on a field while players try to dump the ball into the opponents goal, which looks like a horse drinking trough. This all takes place while other players are fist-fighting in the middle of the field while play goes on around them. Rules appeared to be the same as Pamplona’s running of the bulls. 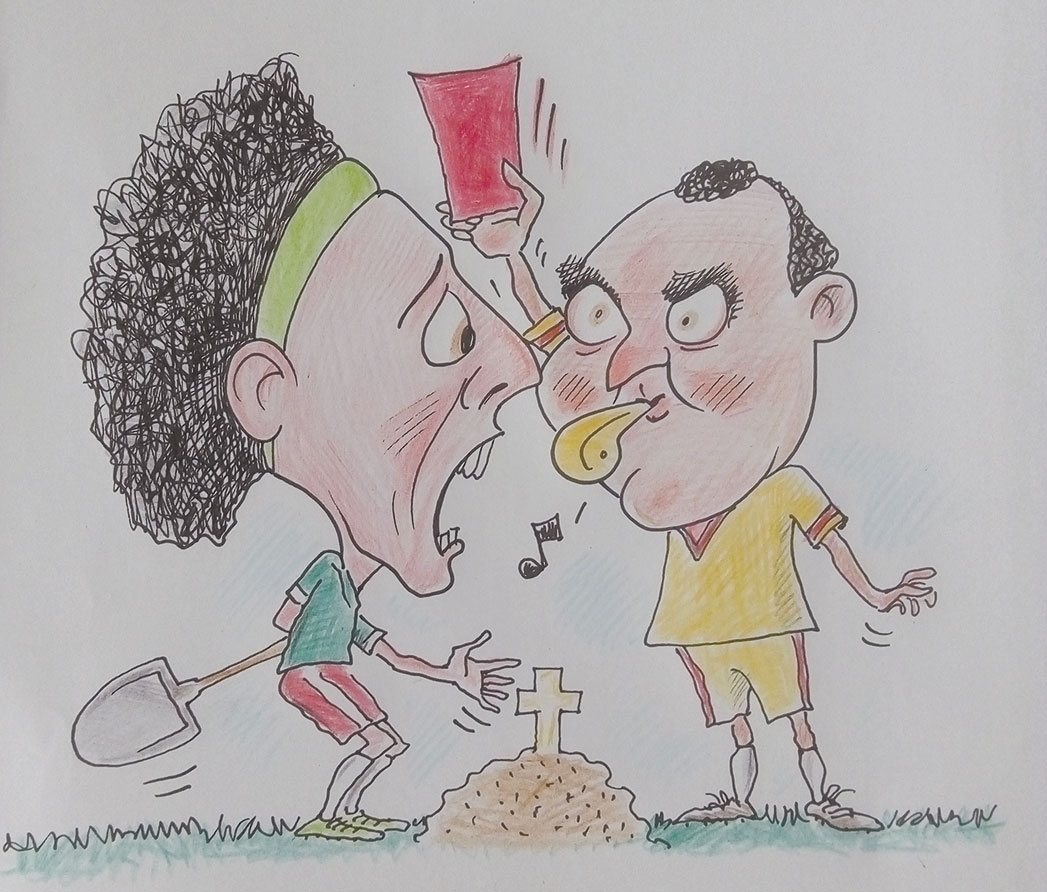 This Florentine game is actually a remnant of the ancient no-rules soccer game handed down to us by the Romans. The English kept this free-weeling football game alive during the Middle Ages. There were still no rules and teams could have 30 to 40 players to a side, earning it the name mob football, or what we might call today “Black Friday Shopping.” According to the Football Bible, the only mob soccer rule was that “actions should not lead to manslaughter.” I guess this earned the victimized team a penalty kick.

2. The red card. This means that a player from one team has attempted to remove an opponent’s limb and is asked to leave the game. A few weeks back I had a tiny auto accident where I backed into another car and left a knuckle-sized dent in a door panel. The traffic officer was the first on the scene and after an hour of demanding his documents be signed and information shared, the traffic officer handed the owner of the bumped car a final form, which she was required to sign in order to forgive me for tapping her car (not making this up).  My point is, since soccer seems to have advanced in civility over the centuries, can there be such a gentlemanly courtesy in sports, so that a red card in soccer can be forgiven by the victim. Or, would this mercy lead us back to manslaughter?

3. Scoring. If anything about soccer is controversial, it is the repressed scoring. FIFA and other soccer administrators have talked about widening the goal posts to allow for higher scores, but conservative soccer law-makers disagreed and the change was never installed.  When one looks at the sum total of all the scoring at the last world cup qualifying games, roughly 011010100100000100100100010010101010100000101010, ironically, this sequence is binary code for, “Is that it!?”

4. Diving. This is when a player pretends to be fouled and collapses in pain when an opposing player six feet away coughs on him.

5. Headers. There are two sports where the head is used as an essential part of the game. Soccer, where it replaces the baseball bat. And boxing, where your head replaces the piñata. In either case, any game where your unprotected head is part of the scoring system is a game still bearing neanderthal roots.