Now, I know there are diets for people with certain illnesses, but, generally, there are just too many diets that claim to make everyone healthy and strong and cute.

And they all seem to be at odds with one another. 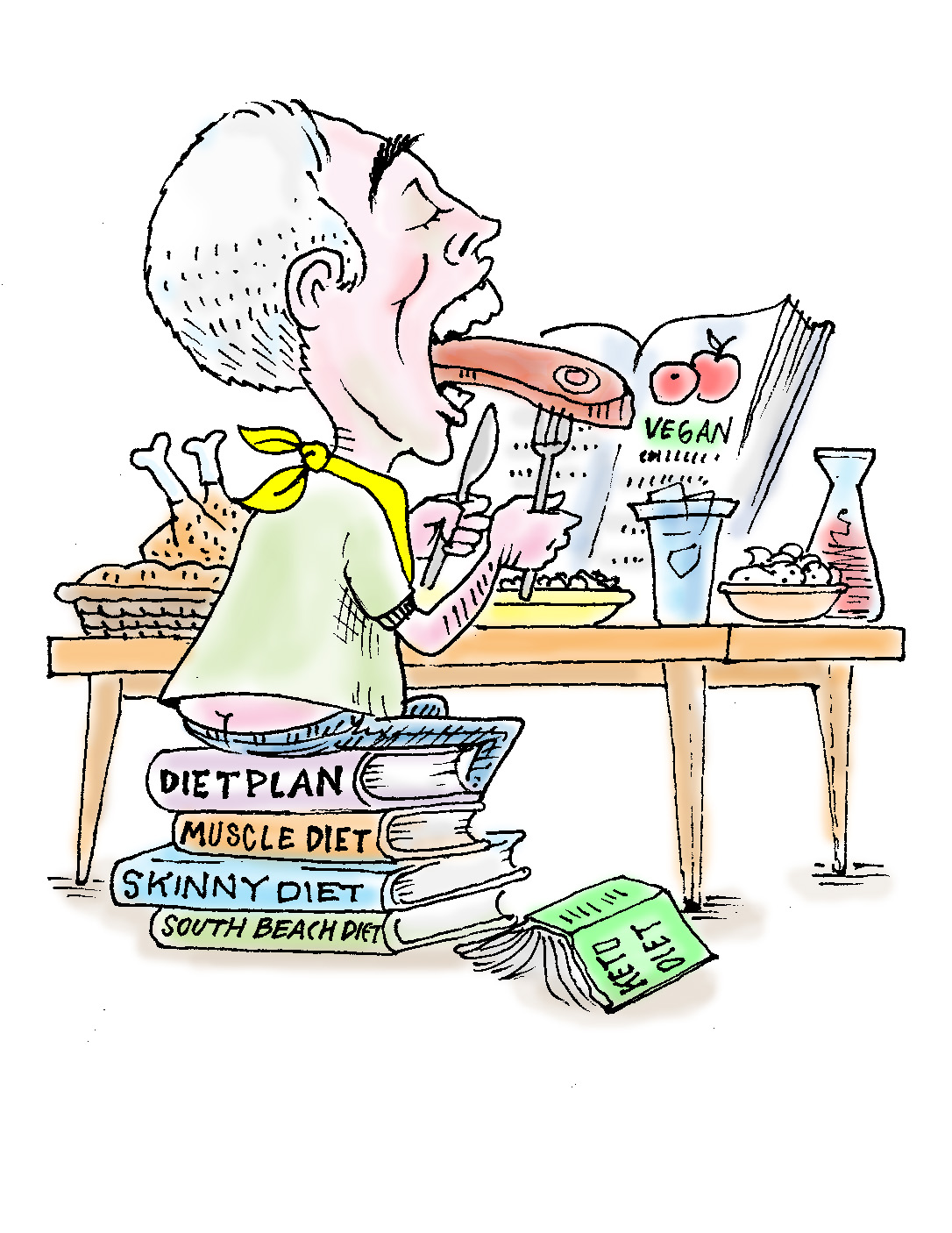 We know about the vegan diet, Mediterranean diet, keto-ultra diet, Atkins diet, Paleolithic diet, lacto vegetarian diet, ovo-lacto vegetarian diet, Snickers vegetarian diet … and on and on. And new ones keep popping up every day, all proclaiming to be healthful, slimming and scrumptious. Some even claim to help you with emotional problems, a notion that goes back to the invention of corn flakes, which were devised 100 years ago to treat people in mental asylums. It didn’t work, and what’s worse, it gave us Tony the Tiger.

One diet promotes protein foods exclusively for muscle-building. You look like the Hulk, but you develop rickets. Another diet promotes carbs, while another says carbs will pop your shirt buttons and turn your heart into a breaded cutlet. Another diet is all meat. The meat choice depends on your blood type and what percentage of Neanderthal you are.

Another says eat fresh fruits and vegetables and no dairy or meat or fish or fowl or anything that doesn’t have roots and can run away – the same diet as a giraffe. And then there are all the variations on these plant-based diets, which allow for three sardines a week or two eggs the third Wednesday of every month, etc. The science here is often as valid as the Zodiac.

There are also ancient diets, as in eating healthy Mexican, which offers valuable and nutritious staples -— corn, beans, vegetables and lean meats.  The Spanish introduced most of the fatty meats, rich dairy products and less potent grains to the Meso-American diet. Otherwise, according to Mexicans, indigenous Mexican food is one of the healthiest in the world: protein-packed beans, fiber-filled tortillas, and nutrient-rich spices such as chilies, garlic, cloves, cinnamon and cumin. They claim the deep fried pig organs cooking on the street are only a sacrificial offering, invoking the gods to fill in potholes.

Finally, there are the wacky diets (these are real): The Baby Food Diet (for people who like to be fed by tiny airplanes); the Clip-Your-Nose-While-You-Eat Diet (do this only when dining alone in your kitchen if you don’t wish to be ostracized by family and friends); and the “What Would Jesus Eat?” Diet; (based on foods mentioned in the Bible, giving Methuselah 900 years. He eventually got so fed up after centuries of tinnitus that he took his own life.)

This leads me to explain the Tasca Natural Diet. It’s a simple diet that I believe is agreeable for every personality, regardless of blood type, age, pre-existing conditions and shoe size. It’s based on the age-old principle of what your body is telling you it craves, interpreted as “what it needs.” For example, if it’s clearly and without ambiguity calling out for a Philly steak, a falafel pita won’t do. And my body almost always adds, “I’ll have fries with that.”

I know there are other foods that are good for me, but I can’t tell you the last time my body said, “Hey, I haven’t had that kale and tofu curry in a while.” Sometimes, at night, when I try to have a favorite snack – carrot sticks and hummus – it demands Ben and Jerry’s and doesn’t stop until I finish a pint. All I’m doing is listening to my somatic cravings, like pregnant women do.

Occasionally, my body just shuts up and the Tasca Natural Diet moves to the Plan B stage. This stage consists of seeking out whatever is in the refrigerator, foods that wouldn’t be there if at some previous point my body didn’t put them on the menu. And don’t worry about expiration. That tuna salad you’re looking at from last week is preserved nicely in mercury. And any uncovered refrigerated dish that still has its fork in it is probably not that old.

It’s age-old wisdom: listen to your body.  But have regular medical checkups.