In three weeks, the debate may surface again over this bull-fightering business, because of the upcoming bullfighting festival in Guadalajara: Feria Taurina La Antigua 2019.

Is it art? Is it sport? Is it ritual slaying as theater? Or is it something even weirder? 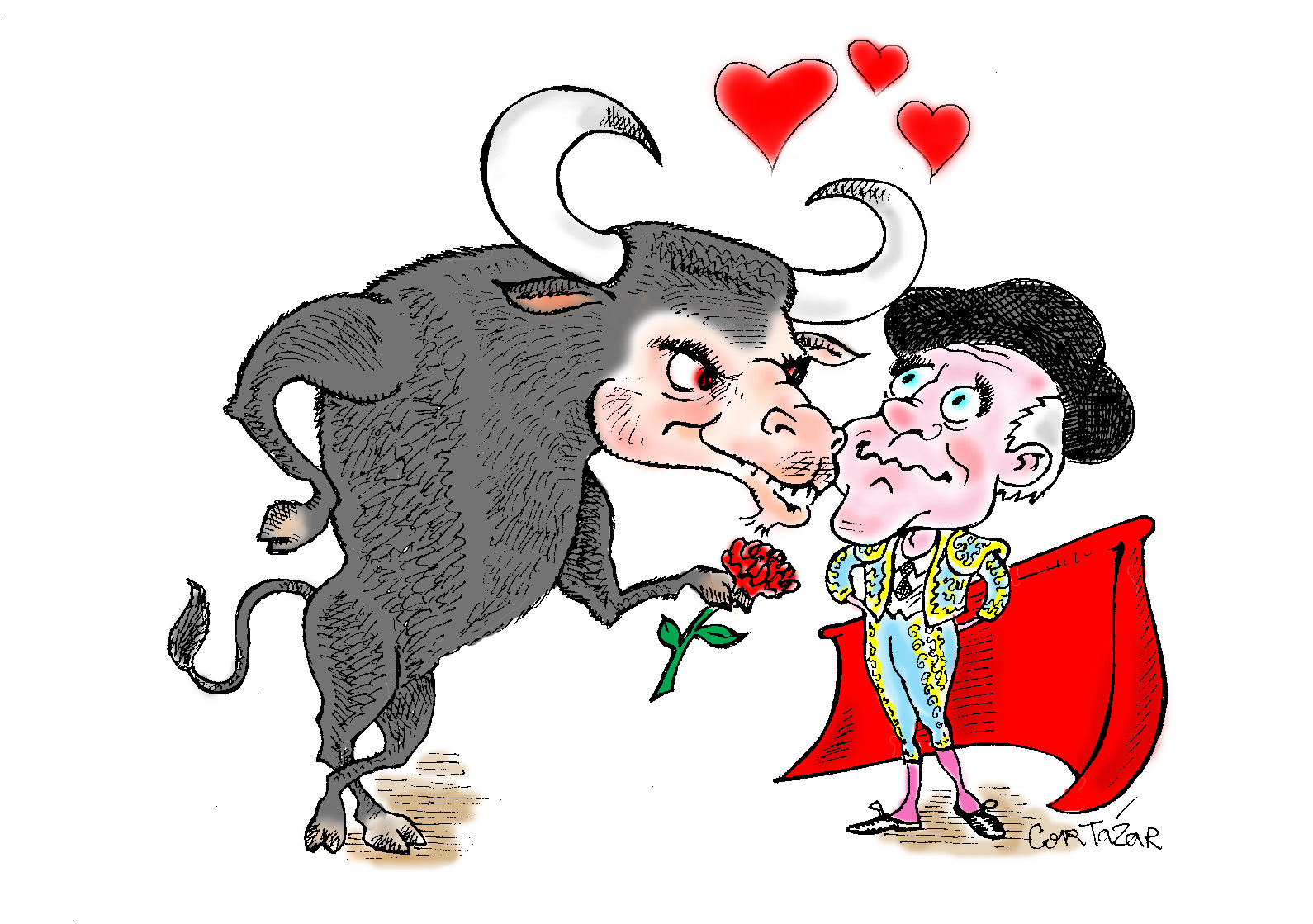 Modern ethologists (forensic psychologists who study animal consciousness – apes, octopuses, cyber-hackers, and so on) have for at least a decade believed that the bullfight may not be what it has always appeared to be – a primal, ceremonial battle of grace against brawn. At least not to the bull. The bullfight, ethologists argue, is really a torrid sexual coming-out for the bull, an experience, I suppose, roughly akin to our junior prom. (I am not making this up.)

There has been evidence in Spain that this phenom is real. Obviously lonely and enraged, some bulls aim to knock over a bullfighter, and instead of goring and trampling the little matador, it mounts him and begins thrusting. Thankfully, these matador-sex objects are rescued in time. And few, I’m sure, feel they were being flirty.

There’s something in the bullfighting tradition called ganados bravos (best bulls or the most aggressive bulls), ethologists explain. These animals are bred specifically for sure-footedness and power – essentials in the ring. These bulls are never allowed to mate with the cows (or anybody else, for that matter). Now, just that fact tells you something. But there’s more animal cruelty here. Not only are the “best bulls” undergoing forced abstinence, but the bulls are deliberately teased into a libidinous frenzy by having the best-looking cows right across the fence from them, smelling great and sashaying about the pasture (looking, I would guess, to a bull, like the Kardashians and sounding just as articulate).

So, according to these theorists, you have the bull, a frustrated virgin (trained for aggression, but normally peaceful, herbivorous and non-predatory), going into the ring, without a spritz of cologne or even a gift-corsage, to meet the torero who, from the bull’s point of view, is a flashy pole dancer in a splashy outfit waving a red cape. As such, the entire corrida ends up like a really bad blind date.

What would His Maleness E. Hemingway have written about the bullfight if he knew about all this?

Hemingway:  Once I remember Gertrude Stein talking of bullfights. She said they were operatic, monumental, explosive, even titillating, and that was just her description of the matador’s pants. I saw the bull rush through the puerta del toro like a true ganado bravo as if to say, “Flap your flirty little cape if you want, señorita. It’s intoxicating for a big, irresistible macho male!” (Hemingway often projected himself into his characterizations.) The bull’s announcement served only to cue the torero into a balletic swirl behind his sweeping red muleta, a turn the beast misread as a seduction. This caused the bull’s blood to rush back and forth between his horns and his hoofs, turning them fiery red as an alert. The bull then snorted out several heated breaths and narrowed his eyes – declaring his certainty that the little torero wanted his baby. The bull then charged once again at his beloved, only to have the torero leap into a mocking pas de chat, flashing his breathtaking rose stockings from behind the flutter of his cape, chiding the beast that there could never be anything between them – except possibly a private lap dance.

Do we have the whole bullfight thing wrong? As representatives of nature’s power, the beasts may have been misreading the excitement of the corrida and may have been expecting a very different pay-off – not just a bucket of corn and bakery waste.

The bullfight as allegory about distorted forms of sexual aggression or the dark and misunderstood influences of erotica and sadism brings another twist to the bullfight debate: that is, two innocent victims instead of one. That would be the lithe, slender persons dressed up in tight-fitting, provocative costumes. And the bulls, too – now that we suspect the bull’s real intentions of ... well, to be continued on page 43 of the National Enquirer.