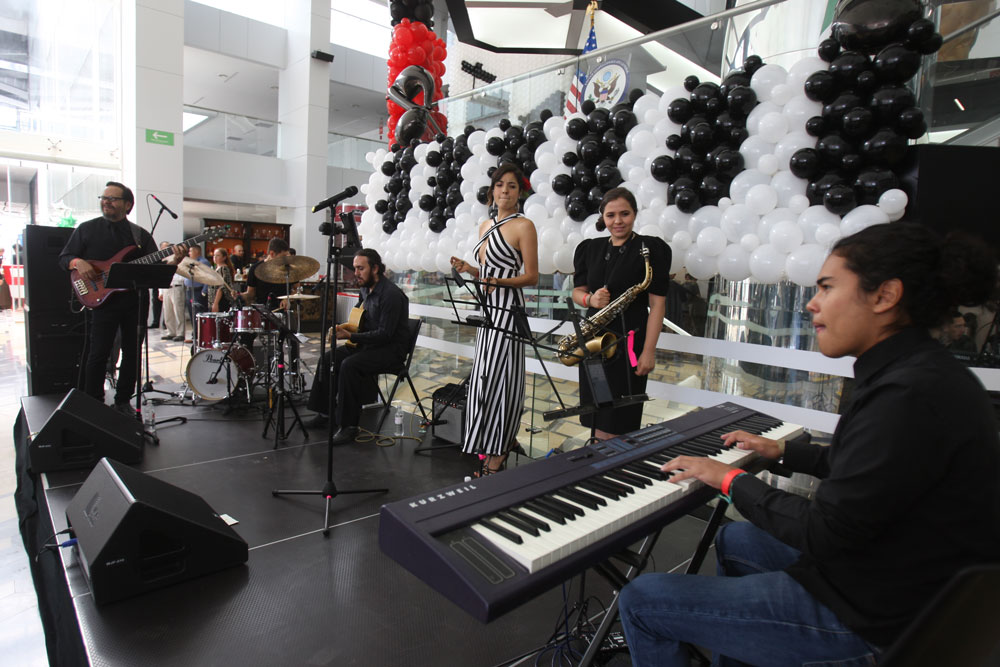 Matthewman focused on her travels throughout the area and interaction with Mexican citizens during her nine months at the helm of one of the United States’ busiest consulates anywhere in the world. Visits to Puerto Vallarta, Manzanillo and experiencing the romeria of the Virgen de Zapopan were some of the highlights she mentioned.

In addition to the 243rd anniversary of U.S. independence, Matthewman also marked 32 years as a foreign service diplomat and her first time as a consul general celebrating the United States’ birthday.

A main focus of the event was jazz. Matthewman noted in her speech that the United States has sent jazz bands around the world as ambassadors for U.S. culture.

Public Affairs officer Caroline Nohr came up with some fantastic photos of U.S. jazz musicians taken from a State Department exhibition by Meridian International Center in Washington D.C., a dozen of which were displayed at the entrance to the event.

One of the artists featured, Duke Ellington, performed a concert at Guadalajara’s Teatro Degollado in September of 1968, along with his orchestra.

Matthewman also noted that the U.S. has had a diplomatic presence in Guadalajara for almost 140 years, although the consulate opened its doors here in 1960 with some 50 employees.

The consul general said the best ambassadors and diplomats were the “many private U.S. citizens living in and visiting the area, be they businesspeople, educators, artists or sportsmen and women, who frequently better reflect our values and construct vital ties between our countries.”

Baritone Ricardo Lavin gave a rousing rendition of the Mexican himno nacional and Vivana Vaiza hit all the high notes of the U.S. national anthem with aplomb.

Food and drink from about a dozen U.S. franchises in the area and Mexican tequila distillers, including U.S. citizen Guillermo Erickson Sauza’s Tequila Fortaleza, kept guests happily noshing and imbibing. Two particularly tasty entrees were the brisket from Skip’s Smokehouse BBQ and the beef and salmon carpaccio from Outback Steakhouse.