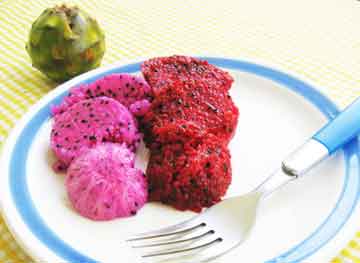 Nothing plucks at the heartstrings of Tapatíos (Guadalajara dwellers) like the annual ritual of the pitaya — that short and splendid season when the delicate fruit with the drab exterior and blindingly brilliant if gooey interior is plucked from the stenocereus gummosus cactus in rural areas south of the big city and rushed to be sold in the picturesque Nueve Esquinas area or by vendors who ply city streets bellowing “Pitaya!” and carrying the tennis-ball-sized globes nestled in large baskets in layers of purple-flowered alfalfa greens.

Despite Mexicans’ love affair with this fruit, there are plenty of young, sophisticated, suburban, tablet-toting Tapatíos who know little pitaya lore.

“Nueve Esquinas?” one asked. “Isn’t that where you get t-shirts printed with your own design?”

You can do that too in Nueve Esquinas, as well as dine on bírria (goat stew) in one of the many good restaurants in this well groomed area which, with its vestpocket plaza, fountains and parquecito (little park), is definitely one of the city’s must-sees, despite the ubiquitous thick traffic.

Approaching Nueve Esquinas from the north, I quickly realized that the pitaya sellers were not exactly in Nueve Esquinas, but a block farther south, alongside the parquecito, at the corner of Nueva Galicia and Colon. But once you approach, rather than having to find the sellers, they find you, with their well honed and very direct marketing techniques.

Here I found pitaya prices much cheaper (2 to 7 pesos per pitaya) than with the street vendors (8 to 10 pesos). Although pitayas all seem to look pretty much the same on the outside, the color of the fruit inside varies from white, yellow and orange to heart-throbbing pinks and reds. (In fact, pink and red hardly describe the jewel-like hues of fuschia, scarlet and vermillion.)

I bought mine from the stall of Eliza Cruz Lopez and family, who were well supplied with all colors and sizes of pitaya, stacked in picturesque baskets. She offered me a taste, telling me to peel it like a banana. I nibbled but was reluctant to gobble down the whole thing until I got it home and put it through the purification ritual I subject most produce to: washing, soaking 10 minutes in water and Microdyn and drying. (Of course, I don’t wash bananas, but the pitaya was more exposed and liquid and led me to fear waterborne bacteria.)

Pitayas of different varieties (and spellings) grow in other parts of the world (Central and South America and Vietnam, Thailand, Cambodia and China, where they are called dragonfruit) but they are native to Mexico. The local variety grows south of Guadalajara in towns such as Techaluta, where the Cruz family rents a plot. It is known as sour pitaya, although in my estimation the taste is neither sour nor cloyingly sweet. 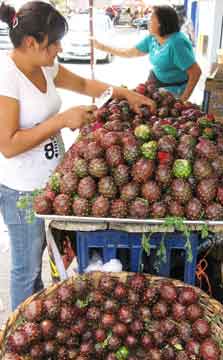 At Nueve Esquinas, Eliza’s older relative was quick to assure me the pitaya business, “is a lot of work … hiring people, transporting the pitayas …” on and on … as if I thought it was a lark to stand from 9 a.m. to 9 p.m. in the hot sun, arranging hundreds of pitayas in neat formations, coddling customers and fending off flies. (Not to mention that when pitayas are on the cactus they have large and scary spikes protruding from them, which the harvesters thankfully remove.)

The Cruz family lives in Guadalajara, but an uncle sleeps out in Techaluta and oversees the picking, transportation and presumably the spine removal.

“He harvests them three times a day,” Eliza Cruz said, adding that, “We are here all May and June.”

The buzz is that the cacti stop producing pitayas as soon as the rainy season starts. During other parts of the year, the family is involved in growing and selling other fruit, but this time of year, they live and breathe pitaya and open their stall even on Sundays.

(During this season, some stalls sell another exotic fruit, guamuchil, a strange, curly, pinkish, beanlike pod that grows on a tree and is also beloved by in-the-know locals. The edible part of guamuchiles are the sweet, cottony blobs inside the pod. A dark seed must be removed before eating. This pleasant tasting and most unusual fruit, I was told, “cleans out your stomach,” which one supposes is a good thing.)

Eliza Cruz said that pitayas last several days as long as they are not put in sun or moisture, and that refrigeration is a good idea. But others say they lose their flavor quickly, which is why I eat as many as possible every day.

With such freshness, eye-popping color and, hopefully, absence of pesticides (although many pitayas are cultivated rather than wild), it’s natural to assume they must be good for you. Indeed, pitayas have anti-oxidants, Vitamin C (they were once eaten to protect from scurvy), calcium, magnesium and omega-3s. They are said to regulate blood sugar and thus to be good for diabetics. On a day I ate five, even though I hadn’t slept enough the previous night and drank but one cup of coffee, I felt perky until 1 a.m.

I prefer pitayas plain — cut in half and then scooped out of their avocado-like skins and heaped up in a sherbert dish, perhaps, with a limón garnish. (In some areas, vendors sell ice cream or sherbert made from pitayas, though I didn’t see any in Nueve Esquinas.) Since the pitaya’s flavor is delicate, other ingredients easily overwhelm it and the color alone makes it impressive enough.

However, I did come up with a Pitaya-Chicken Salad and concocted it in the Guadalajara Reporter’s large and well-appointed test kitchen. Here is the recipe. Adjust all quantities based on the number of people eating.

It was a good salad but, like I said, the delicate flavor of pitayas was pretty much obliterated. Perhaps lemon instead of balsamic vinegar?

Incidentally, pitayas are not the same as the more readily available tunas, which is not fish, but the green fruit of the prickly pear, about the same size as a pitaya, but with bothersome seeds that ruin the savor of the fruit. Tunas are sometimes available in supermarkets, but I have never seen the delicate and short-lived pitaya in Soriana.