With major changes in Mexican law that began in 2012 and 2013, people coming from outside Mexico to work here are finding it necessary to do more advance planning than in the past.

For some foreign workers in highly skilled jobs, especially in the technology sector, satisfying the complex new requirements of the Instituto Nacional de Migración (INM) is relatively easy because their specialized jobs are very much in demand. The bureaucratic process is handled by lawyers their companies hire expressly to deal with INM.

“They began the process while I was still in India,” said Benjamin Manoharan, a software consultant for a large Indian company. He consults for a New York bank, but is based in Mexico for time zone and economic reasons.

“Initially I got a one- or two-month visa to travel to Mexico from the Mexican embassy in India,” he recalled, noting that the procedures may vary, depending on a worker’s nationality or education and that company lawyers handle the process so well that he is not sure of the exact requirements.

“Later I got a temporary permit for a year’s duration, which has to be extended every year.” Manoharan noted that the Guadalajara office of his company employs approximately 50 percent Mexicans (and a few nationals of other Latin American countries) and 50 percent Indian nationals, all fluent in English. To some degree, strict immigration requirements are prompted by a desire on the part of the Mexican government to ensure that foreigners don’t take jobs away from Mexicans, but for some positions it is difficult for companies to find qualified workers. 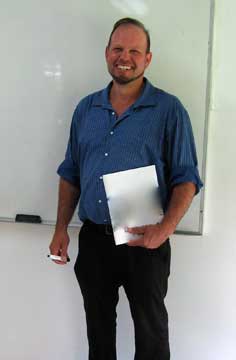 Another field much in demand, although slightly less than high tech, is teaching English. Here, the change from past immigration procedures is very evident, although different schools that hire teachers may be stricter or laxer.

“I was told by management that I could no longer hire backpackers and people who came to Mexico on vacation and then decided to try and find a job teaching English. Some of them were broke,” said Rob Sorensen, who has been contracting teachers at a large English language school in Guadalajara for several years. “It used to be that a school could convert somebody’s tourist visa into an FM3 working visa for the requisite fees in about a month and a half. Now the process has to be initiated outside the country.”

Despite this change, English teachers who are native speakers are still very much in demand at schools, although they must normally jump through many new hoops established by the 2012 law.

“I think word has gotten out that it’s not so easy to get a teaching job in Mexico any more,” Sorensen said, “because I’m seeing fewer foreign applicants” showing up at his doorstep, although some contact him by e-mail.

“My boss is always telling me to hire more native speakers but my hands are sometimes tied because of the new visa requirements.”

“We are looking for teachers now and all our teachers are foreigners,” said a spokeswoman at another large Guadalajara school that also offers teacher training courses, known as Teaching English as a Foreign Language or TEFL.

Despite stiff requirements, teachers who are determined and willing to wade through bureaucracy, sometimes with the help of a school’s human resources department, can manage to secure reliable employment.

For example, Ed Wallman, a former dairy farmer from Indiana, decided while still living in the United States that he wanted to come to Mexico.

“I was originally hoping for a job related to the dairy industry, but I saw an ad on the Internet for English teachers. I’d been teaching all my life, training people on farms.”

So, on a tourist visa, Wallman came to Guadalajara to take a month-long TEFL course offered by the school where Sorensen hires. Afterwards, he secured a letter of invitation from the school and returned to Indiana to initiate the process for getting permission to work at the Mexican consulate in Chicago.

“It took me about four months because I’m not that good on the Internet. It should have taken only two months. I set up an appointment in Chicago, got a list of the documents I needed, took them to Chicago and got a temporary working visa. Once I got back down here, the human resources person at the school handled it. I just had to go two or three times to Immigration downtown.

“If you plan, you can get a job here,” he emphasized, noting that he had long studied Spanish and now wishes he had studied more.

“With the new immigration law, it makes it hard for English schools to get you, so there are plenty of schools looking for teachers,” Wallman said. “Plus, the bad press in the States saying Mexico is dangerous scares a lot of Americans and that helps increase the shortage. For example, right now there aren’t any foreign students in the TEFL program here. But I haven’t had any problems — I haven’t been robbed or anything.

“But my relatives think I’m crazy to be here,” he added.

Even schools that comply with regulations face the threat of visits by “the migra” as one director ironically referred to government investigators. The director reported that such officials generally focus on blonde teachers and knew of one who, in a state of panic when officials visited, “went over the wall.” “Some schools don’t seem to pay much attention to the new rules, or maybe the government just doesn’t enforce it uniformly.”

The director added that there are rumors that the stricter laws initiated in 2012 were prompted by a desire in Mexico City to control an influx of immigrants from Eastern Europe and West Africa.