Mexico’s celebration of Christmas begins in earnest on Tuesday, December 16, when the the first traditional posada takes to the streets in towns and villages across the country. 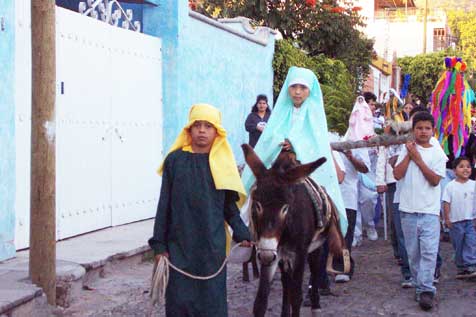 While the lights and carols have been playing in stores and malls for weeks, it is this series of charming daily processions that puts most Mexicans into a holiday mood. The Spanish word for inn is posada. In its purest and most traditional form, a posada is a walking reenactment of Joseph and Mary’s journey to Bethlehem and their search for a place in an inn.

This Christmas tradition is uniquely, genuinely and exclusively Mexican, apparently instituted soon after the arrival of the Spanish. It is said that San Ignacio de Loyola may have created the custom in order to teach the story of the birth of Jesus to the former Aztecs who had previously marked winter solstice celebrations honoring the diminishing old sun, and the virgin birth of the Aztec sun god, Huitzilopchtli with nine daily processions.

Nearly 500 years later, children in the villages around Lake Chapala still set out on symbolic pilgrimages on each of the nine evenings before Christmas. Each Lakeside village has a treasured posada tradition slightly different than others.

In Ajijic the peregrinos (pilgrims) are led by an angel who guides Joseph on his search for a room in an inn. Joseph leads a burro carrying a small girl in blue and white robes demurely playing her role as Mary.

Four children carry a platform on which are mounted small figures of the holy pilgrims, the Angel, Joseph, Mary and the burro. And coming along behind is the large flock of excited, giggling, jostling, bumping, wiggling, shiny-eyed village children.

Some are dressed as old-time Spanish shepherds and many carry ribbon-and flower-bedecked shepherds’ staffs which they tap in time to the traditional villancicos (Christmas carols) they sing, sometimes accompanied by a neighborhood guitarist or accordion player.

The procession stops several times so that the lovely verses of the traditional posada song can be exchanged between Joseph with his group who ask for shelter for Mary, and those inside the house who rudely tell Joseph they don’t want his kind in the house. Finally, at a prearranged location, the innkeeper sings from inside the house, “Enter holy pilgrims, receive this humble corner, that while we know it is a poor lodging, it is given as the gift of heart.”

With that cue, the party begins. The particulars vary with the neighborhood, village and group, but most often there are bolas (bags of candy and peanuts) for the children, joyous music, and at least three piñatas bursting with treats.

In Ajijic, the platform with the holy pilgrim figures remains in the house that offered them shelter until the procession reforms the following afternoon and returns to pick up the holy pilgrims for another search for an inn. On Christmas Eve, the ninth and final night, the procession ends at San Andrés Church.

The Ajijic procession will end at Zaragoza 7 (1/4 block east of Colón between 5:30 and 6 p.m. on Tuesday, December 14). The organizers in the crowd can direct those who wish to attend again to the next evening’s location. Another good source of information are always the folks who operate neighborhood stores.

The village of San Antonio Tlayacapan has several variations on this theme. The procession begins from a different neighborhood each evening, and at each stop for Joseph to ask for a room, the neighbors have created a Biblical tableau and there a Bible story is read to the children. The last stop each night is at the church – in time for evening Mass where the children observe the serving of the gift of bread and wine.

The routing, stops and destinations for the nine San Antonio posadas won’t be decided until Sunday, December 13. A color-coded map will then be fastened to the church door showing each day’s route.

There are dozens of other variations on the basic posada theme. In recent years, school programs, office parties, ladies’ holiday coffees and boys’ nights’ out are all being called posadas. Most are just parties, although a few retain a hint of the original search for lodging.