An afternoon and evening of fun, food and drinks awaits you at Cesar’s Restaurant (Playa Manzanilla, La Cruz de Huanacaxtle) on Friday, November 16. The Welcome Back Beach Party is the first big event of the season for Amigos de La Cruz.

Come as early as you like for a pre-party swim at the calm beach. Cesar’s will feature 2x1 happy hour drinks from  5:30 to 6:30 p.m., followed by a Mexican buffet beginning at 7 p.m., along with mariachi music and dancing.  Raffle tickets will be sold for a variety of great prizes. 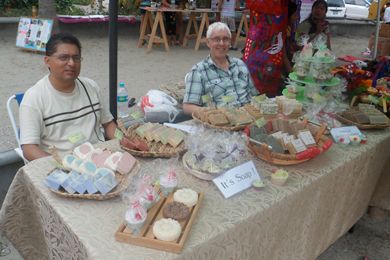 It’s Market Day almost every day of the week in the Northshore area.

- The Thursday night Bucerias Art Walk takes place from 7-9 p.m. Though not actually a market, galleries on several blocks of Lazaro Cardenas open late for this special event, some offering refreshments to the many visitors who wander into their stores.

- Don’t stay up too late after the art walk. On Fridays, from 9 a.m. to 2:30 p.m., the Bucerias Artisans Co-op Market sets up its booths on the block of Abasolo between the beach and Lazaro Cardenas. Everything on sale is required to be made locally by hand. You’ll find natural fruit juices, jewelry, pottery, clothing, carvings and paintings, as well as artful calendars and a selection of used books for grownups, in English, from the Bucerias Children’s Library. (The volunteers there will also accept donated used books at their booth.)

- La Cruz de Huanacaxtle Market Day takes place on Sundays at the southern end of the beautiful La Cruz Marina,  along the walkways surrounding the fish market. Among the dozens of vendor booths lining the sidewalks, you’ll find vendors of jewelry, metal art, clothing, bakery items, soaps, articles made from recycled material, homemade pickles and more. As you’re bound to get hungry before you’re ready to leave, make sure you take advantage of the many food booths.

- And on Mondays, at the Bucerias Art Walk Plaza (Lazaro Cardenas 62, near Galeana), a group of vendors takes over the courtyard selling baked goods and soups, jewelry, artwork and other handmade crafts. It’s open from 9 a.m. to 2 p.m.

The 300-peso ticket price includes a chance at a door prize, a wonderful selection of hors d’ oeuvres, wine, beer and music.  There will be plenty of great raffle prizes too. Tickets are on sale now, so hurry.

You can purchase tickets from any Beta Sigma Phi member or call Melinda, 322-158-0170, for information or tickets.

Restaurants on the move

If you spent the summer back north, you may be looking for some of your favorite dining haunts in Bucerias and can’t find them. Here’s a summary of eatery relocation.

While not exactly a relocation, you may think you’re seeing double because El Brujo has opened a second location in Bucerias. The new location is on Galeana between Lazaro Cardenas and Madero, where several other restaurants are located. The original El Brujo in el Centro will remain open, the owners say.

Flaky’s Fish and Chips has moved back to the Bucerias town center after a stint south of the arroyo. They are now located on Cuauhtémoc, between Avenida Mexico and the lateral.

Casa Triskell has moved into the former Twisted Rose location at the corner of Avenida Mexico and Hidalgo in the center of Bucerias. By the end of the month, word has it that they will be sharing the location with a “select-your-own-cut” steakhouse, new to the area, called Sonora a La Parrilla.

French bakery Delices de France, formerly on Hidalgo in Bucerias Centro, has moved to the south lateral near the Decameron Resort arches.

Mr. Cream – a popular breakfast spot a la IHOP waffles, hotcakes and eggs  on the Vallarta Marina “boardwalk” – has opened another branch in Plaza 3.14. It can be found on the south side of the glorieta, just past the security booth at the north Nuevo Vallarta entrance.

Many people in the Northshore area are familiar with the community service organization called PEACE, headquartered in Punta de Mita. The group is known for its free animals spay/neuter clinics, educational programs, beautification projects, work-for-food program and recyclables collection.

Molly Fisher founded the organization seven years ago and has been the group’s energetic director and hands-on force, both organizer and fundraiser, behind the small paid staff and numerous volunteers.

This past summer, Fisher received an offer she said she couldn’t refuse from Worldfund Mexico,  whose mission is “to raise the quality of education in Latin America in order to transform lives and break the cycle of poverty.”

So, as of October 1, Cecilia Paredes became PEACE’s new director of operations.  She has experience in international community development in a variety of cultures, having lived in Eastern Europe, Romania, former Yugoslavia, the Czech Republic, Honduras, India and Mexico. She is fluent in Spanish, English and French.

In addition to her new role in Mexico City, Fisher will continue as president of the Mexican Board of Directors of PEACE and will also be joining the U.S. board.

Since its foundation, PEACE has provided over 85,000 hours of education, 12,000 hours of community beautification and 60,000 meals for hours worked in community improvement projects. It has also collected more than 40 tons of recyclables and administered 4,000 spay/neuters to reduce animal overpopulation in the area.
For more information about PEACE, go to www.peacemexico.org.