Bucerias now has its own symbol representing its name, taken from the Spanish word buzo, meaning diver. 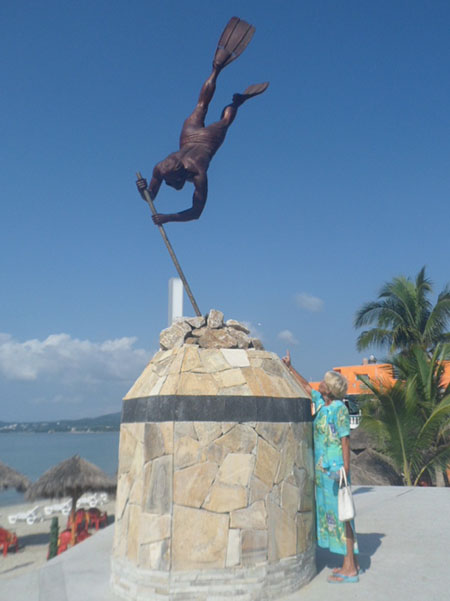 The coastal town was founded as a mecca for divers searching for seafood, especially oysters, which have always been plentiful in this part of Banderas Bay.

El Buzo, a four-meter tall bronze statue, was installed on the newly remodeled Bucerias Malecon, as part of a somewhat lengthy renovation of the town plaza’s amphitheater area, which started toward the end of 2013. The cost of the statue, about 200,000 pesos, was underwritten by an anonymous Bucerias resident. Several fundraising projects, including a dinner, raffle and T-shirt sales, have been organized to pay back the donor.

Octavio Gonzalez, the sculptor of the statue, is well known throughout Mexico and best known locally for his whale statue at the entrance to the Marina Vallarta residential and commercial development. Bucerias sculptor Armando Solorio collaborated with Gonzalez.

The statue was “presented” to the community on Father’s Day, June 20, in “honor of the founding fathers of Bucerias” – the divers.

Some minor alterations have been made to the work after safety concerns were raised regarding children potentially climbing on the statue.
A date for the official inauguration of the statue is yet to be established.

The party will be held on Wednesday, November 19, from 7-10 p.m. at Condos La Vida, on Lazaro Cardenas  in Bucerias. The 300-peso ticket includes a chance to win a door prize, a selection of hors d’ oeuvres made by the members of the chapter, and three drink tickets for wine, beer or soft drinks.  There will also be raffles for many prizes.

This event is always a sell-out so get tickets early. 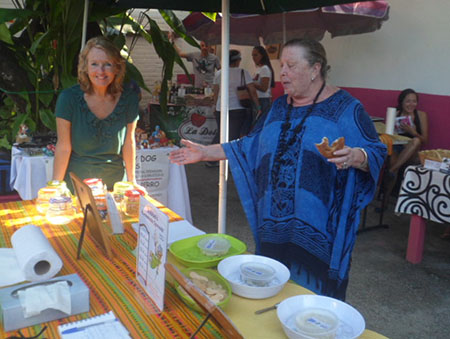 Furniture, gently used clothing, books, kitchen and household items, etcetera are needed to make this fund-raising bazaar a success.
Pickup can be arranged if needed.

The bazaar will be held at the Manos de Amor shelter, located at Calle Rio Balsa and Rio Compostela in Bucerias. Turn inland from the lateral on Rio Colorado (first street north of the Decameron light) and follow the signs.

Alison Nomanton, organizer of the Forever Spring Market in Bucerias, was expecting the first “farmers market” of the season in the northshore area to open last Wednesday and run smoothly without any problems.

She had made several trips to the Presidencia (city hall) in Valle de Banderas to ensure all her paperwork was in order and believed she was complying all the necessary regulations.

But unknown to Nomanton, new ordinances governing markets that came into force in September had changed the game plan. So she was surprised when municipal inspectors arrived around at the noon to shut the market down.

Nomanton learned that not only does each vendor need to buy a permit to sell their items, but the venue itself, in this case a lot adjoining a restaurant, also requires a permit to operate a market.

The market had opened at 9 a.m. and was set to close at 1 p.m. By 12:30 p.m., almost all of the vendors had packed up their goods and left. Normanton says she is now looking for a new location for Forever Spring.

The market in La Cruz was allowed to stay open last Sunday because, according to one of the vendors, organizers had obtained a one-off market permit even though many traders didn’t have their individual permits.

The markets in Sayulita, Nuevo Vallarta and Lo De Marcos have also been visited by the municipal inspectors.