Among the 21 winners from the Riviera Nayarit was the Bucerias Art Walk, which kicked off November 5, celebrating its 9th season.

“This type of recognition is a clear indicator that we are on the minds of tourists and this motivates us to keep going,” says Art Walk founder Christy Ann Beguesse. “Like a good wine, getting better every year.

The Bucerias Art Walk takes place every Thursday, from 7 to 9 p.m. until the end of March. The galleries to visit are located in a three-block stretch of the well-lit and paved Avenida Lazaro Cardenas.

Seventeen galleries responded to Beguesse’s call for their information to be included on this year’s map.

“I was a little discouraged this past season as I saw many galleries closing due to relocations or retirements, but I am gladly witnessing the emergence of a new young group of artists filling the vacant spots,” she says.

“These fresh new galleries are bringing a great vibe to the Art Walk, such as Galleria Soñe, established by ‘dreamers,’ as they like to call themselves. The three young women – a painter, furniture maker and textile designer – have created a fun and wonderful space.”

Restaurants in the area also offer free samples during the Art Walk, which could also be called a “Tastewalk,” Beguesse adds.

For more information or a map, visit thebuceriasartwalk.com. 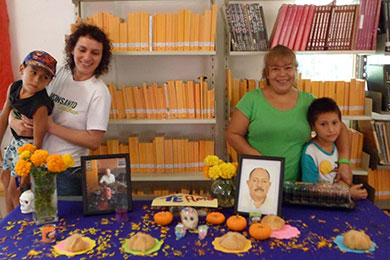 Rosie Guerrero (left), Mago Castilllo and children look over the Day of the Dead altar honoring former library board members/volunteers Oliver Kollock and Jesus Gonzalez Rubio. The library’s popular annual fund-raiser calendar sale has begun. Call Rita Kollock at 298-1263 to get yours.

International Festival Gourmet, November 16-22. The Puerto Vallarta-Riviera Nayarit-Tepic International Gourmet Festival is one of the most important culinary events in Mexico. This year is the 21st anniversary of the festival. Participating are 46 chefs from Mexico and abroad and 22 hotels and restaurants. There will be seven different theme nights, as well as cooking demos, workshops, chats, theme nights and plenty of other activities to entertain attendees. For more information, visit festivalgourmet.com.

Riviera Nayarit Half Marathon and 10K Run, November 21.  The 7th annual Riviera Nayarit Half Marathon and 10K run is a key event in the northshore, promoting sports, tourism and a focus on family. Nuevo Vallarta hosts this increasingly popular event, which is expected to be bigger than ever this year. If you want to go for a tough run in Mexico’s hottest beach destination, visit mediomaratonrivieranayarit.com.

5th Motomanía San Blas, November 20-22. Not far up the coast from the northshore, more than 1,000 motorcycles are set to converge on the historic port city of San Blas. Among other things, they will be raffling a motorcycle, and hosting exhibits, races and other fun events. For more details, visit Motomania San Blas on Facebook.

The huge hole dug in the ground along Highway 200 near the south side of Bucerias in early summer has been filled with massive steel supports and beams.

The hospital will serve a string of Nayarit coastal towns and developments, including Nuevo Vallarta, La Cruz, Punta Mita, Sayulita, San Pancho and, of course, Bucerias.

This hospital will offer cutting-edge diagnostic services and the treatment of diverse health problems, in common with its sister facility in Puerto Vallarta.

A spokesperson for the hospital said an emergency room area will be ready for opening by early 2016, while the remaining sections would be completed in stages over the next two to three years.

The new facility will compliment the San Javier Hospital in Nuevo Vallarta and the Santa Rosa and Medic-Air Hospital clinics, which both have full diagnostic and operating capability, although on a smaller scale.

The new hospital is another example of Banderas Bay’s increasing self sufficiency. In the not too distant past, residents of the area relied on neighboring Puerto Vallarta for almost all of their services. Now the area is well served by superstores, banks and shortly, with the opening of the CMQ Premiere, two elite hospitals. 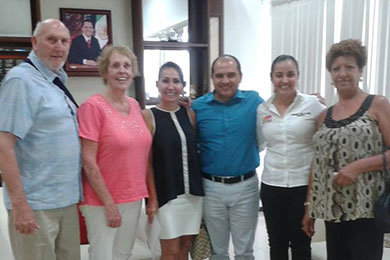 Members of the board of Bucerias Terecera Edad met with the Bahia de Banderas Mayor Jose Gomez and his wife, Monserratt Peña de Gomez, head of the municipal Family Development Agency (DIF), to discuss their assisted living residence project in Bucerias. The results were described as “promising.” From left are Jim Moxin, Marilyn Moxin (board president), Dinorah Gomez (board vice president), Mayor Gomez, Peña de Gomez, Amelia (the Moxin’s neighbor and translator).

Scheduled to open in 2016, the oceanfront resort will feature 120 lavish guest villas, a W Living Room (the W brand’s spin on the hotel lobby), nightlife in the W Lounge, the WET outdoor pool deck with views of the ocean and a signature restaurant.

“With more than 25 million international tourists a year, Mexico continues to be an important and growing market for us,” says Victor Vazquez, vice president of Development and Acquisitions, Starwood Latin America. “W Punta de Mita will be the perfect addition to this booming landscape, offering vibrancy and style.”