“The Hostages of Veracruz” is a romantic thriller set in Mexico written by former Guadalajara Reporter staffer (1996-2001) Grady Miller.

Miller previously published his own humorous diet guide, “Lighten Up Now: The Grady Diet,” which this newspaper mentioned in the City Living column in July 2013. He is presently an actor, writer and a humor and nutrition columnist for The Canyon News serving southern California.

Miller got the idea for this fictional novella from an article he read in Mexico’s hard-hitting Proceso magazine in the mid 1990s. His working title for a short story was, “An inconclusive investigation into persistent rumors of organ snatchers in Latin America.” 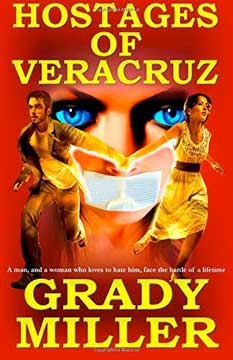 It eventually evolved into a novella. “I saw it as an invitation for fiction to step in and tell the truths that more factually-based writing can only hint at,” Miller told the Reporter while on a hiking trip to the Grand Canyon this week. Just before the battery on his phone gave out, he had this to say: “This story came out of my Guadalajara years. I’m excited it came out of the deep freeze. There’s horror and romance and it will make people think about the world we live in and the hideous things that happen. It was nice to come out with literary fiction after doing the diet book.  It comes from my obsession with suspense films. I picked Veracruz as the site of the crime, mainly because it has a Carnival celebration.”

While working at a California university, Miller translated a study about the Rockefeller Foundation’s work in Mexico during the 1910s and 20s. They came to eradicate malaria and yellow fever.

“It blew my mind how they used this work as a shield for a political and business agenda. This inspired the idea of charity as a front. Which you can easily see homegrown in Mexico in the panhandlers dressed as Red Cross nurses. It doesn’t have to be a big foundation from the colossus to the north. That certainly worked, though, in ‘The Hostages of Veracruz.’”

One reviewer called “The Hostages of Veracruz”  “high-adrenaline coffee between the covers ...  It will keep you awake at night.” The tome is about a four-hour read that keeps up a fast pace and has enough references to Mexico and Guadalajara to keep local expats more than intrigued. The self-published paperback can be ordered via Amazon.com (http://amzn.to/1skwiWg) for 6.99 dollars. A Kindle version should be available in a couple of months.