“The world has hit a frightening high tide of reactionary, fundamentalist, strong-arm  madness, where religious tolerance, diversity, inclusiveness and truth have become existential threats, requiring extreme measures of self-righteousness in order to prevail. If left uncontrolled, where will it end?” 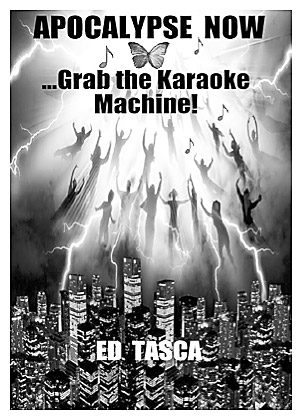 This is the question lakeside author Ed Tasca asks in his updated novel, “Apocalypse Now, Grab the Karaoke Machine!”

Just before he died, Christopher Hitchens permitted Tasca to use a quote from his last book, “God is not Great (How Religion Poisons Everything)” as a brief prologue to the novel. It says in part:“With a necessary part of its collective mind, religion looks forward to the destruction of the world ... [not in the sense of] anticipating the end. I mean, rather, that it openly or covertly wishes that end to occur.”

Tasca’s novel, newly-revised in e-book form by Aardwolfe Books, is a comic and surreal take on how fundamentalism and regressive authoritarianism can lead to self-prophetic apocalypse. Notably, today, it is at the heart of radical thinking around the world. Religious battles can’t be won today, he says, but bringing about the end of the world could in itself represent a religious victory, and the means and desire to effect such are everywhere.

An anthropologist and a U.S. Department of Homeland Security spokesperson reluctantly team up and inadvertently get involved in a bizarre bio-engineering conflict wrought by religious fanatics vying for the future preeminence of man’s beliefs. The bio-tool is a bacterium (an actual Japanese bio-engineering breakthrough), which can be encoded for an apocalyptic future.