A quiet, vest-pocket park just off Avenida Vallarta near the Minerva glorieta, crowned by a bronze statue that some think is Genghis Khan, is the backdrop for a restaurant, Trivoli, that is thronged by customers attracted to its Mexican menu highlighted by a Mediterranean touch.

Lebanese culinary influences, such as olive oil, lamb, a hefty wine list, an olive motif, and even the custom of serving all dishes in the center of the table for sharing, are clues pointing to Trivoli’s ties to Lebanon, along with the nearby “Genghis Khan” statue, which in reality depicts a Lebanese immigrant.

Surrounding that sculpture in the little green park, officially known as Plazuela Vallarta, are benches inscribed with the names of influential Lebanese-Mexicans, some of whom live in the neighborhood surrounding Trivoli. Many of them arrived in Mexico early in the 20th century. (Incidentally, business magnate Carlos Slim is descended from Lebanese parents who emigrated to Mexico around 1900, but Slim’s large, Maronite Catholic family is based in Mexico City, not Guadalajara.)

It is not clear how many of Trivoli’s customers live in the neighborhood, have Lebanese backgrounds or are even aware of Trivoli’s unique provenance — the breakfast buffet is a very Mexican lineup of steaming guisados residing in traditional, brown clay vessels and the customers comprise families, businesspeople, couples and groups of ladies enjoying their “coffee klatch.” (The coffee is plentiful and good but, disappointingly, non-dairy creamer is served with it, although real milk is available on request).

The satisfying, full buffet (8 a.m. to 1 p.m., 139 pesos on weekdays, 149 on weekends) includes about half a dozen of the traditional guisados floating in usually-spicy gravy, along with luscious chef-grilled sopes, (fat little corn flour cakes with savory toppings) tortillas and quesadillas. You may also take what you wish from another bar well stocked with fruit, cottage cheese, yogurt and more. Sweet rolls are on the table.

The lower-priced cold buffet (84 pesos) includes the fruit bar, plus beverages. We were told that the only limitations were the number of glasses of juice (orange, grapefruit and jugo verde) and the proscription against carry-outs and “doggie bags.”

What is outstanding about the full breakfast buffet is that for the same price you may also order whatever you like off the breakfast menu. At my table, besides the takings from more than one trip to the bar/grill, we enjoyed a spinach omelette and Huevos Trivoli, which is eggs poached in olive oil, with  jocoque (thick Mexican yogurt) and black olives (canned ones, sadly, but the dish still tasted good). Pan árabe (pita) was served with my Huevos Trivoli. 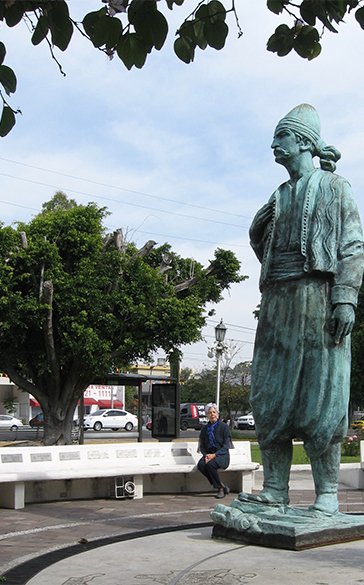 Newspapers (Crónica) are thoughtfully placed on the tables for breakfast and regulars say there is often a short line of people waiting near the park’s gazebo in the morning. Parking on the wheel-and-spoke streets around the plazuela appears convenient and some of it is metered.

Dinner is served until 1 a.m. (or midnight, depending on whether you believe the staff or the web page) and Trivoli’s Mediterranean/fusion dinner menu is impressive. Our attentive waiter informed us that some of the most popular dishes are Pulpo a las Brasas (grilled octopus, 180 pesos), a 200-gram hunk of Vacío (tender flank steak, 170 pesos), Pato Confitado (sugar glazed duck, 180 pesos) and Salmón en Salsa Tamarindo (salmon in tamarind sauce, 180 pesos).

Similar to the breakfast deal, Trivoli offers a whole-shebang dinner for 249 pesos. It comprises an appetizer, soup, salad, pasta, pizza and plato fuerte (main dish), and includes the option of ordering off the menu.

Trivoli’s main dining room faces the little park and is open-air on two sides (except for a hip-high wall), so it can be cool. Its large bar is stocked with liquor, a variety of artisanal beer and wines from Spain, Argentina, Chile, the United States and Italy, highlighted by 13 (we counted them) Mexican wines, including some praised names such as L.A. Cetto. Salud, cheers and kasak!