Poutine, that quintessential savory French-Canadian concoction of french fries topped with melting cheese and gravy, had not made it into my brain until a few days ago, yet it has been alive and well in a small eatery—Pinche Poutine—in a bustling Guadalajara neighborhood for three years already.

But Santa Teresita’s poutineria has some significant twists: the gravy is not meat based, but instead comes in seven vegan varieties, some with a Mexican touch (Macho Mexicano BBQ and Nopalero), others Asian (Seitanico and Godzilla)—all created by Pinche Poutine owners Antonio and Chris.

The married couple not only lovingly invented the menu, but came up with a plethora of other creations. Some of their innovations are to the poutine itself (such as the seven types of gravy, the vegan twist, and using fried yams or plátanos machos instead of only potatoes as the base of the poutine). Other creations are a dizzying list of dishes that practically burst the walls of the sparkling clean, four-table establishment: a list of vegan hamburgers they call “vurguers,” fruit and nut shakes they call “ochakes,” “pourritos” or their version of burritos, a poutine salad … the list goes on.

But the innovations don’t stop with the food. Antonio and Chris, as one may suspect from their vegan orientation (which has not won them instant acceptance in Santa Teresita, famed for meat restaurants such as Karnes Garibaldi), are also relentless respecters of environmental concerns. 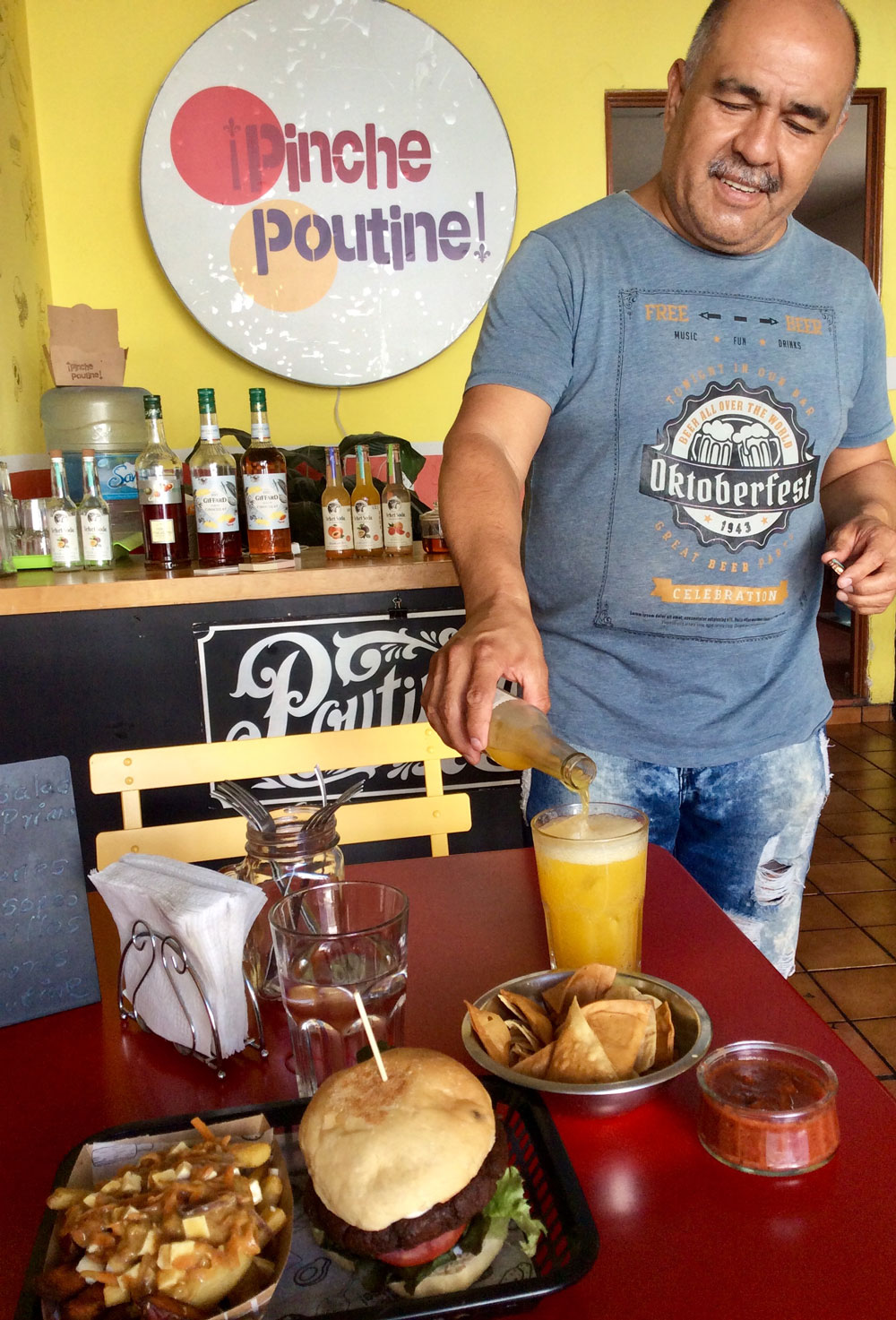 “Our carry-out containers are biodegradable, not unicel [styrofoam], our disposable forks are made from plants, and the burger-wrap paper is made of onions,” Antonio points out, showing off the custom-designed items, all imprinted with Pinche Poutine motifs.

More importantly, the food is artisanal too, he added, down to the homemade buns, tortillas and vegan mayonnaise. (Antonio, incidentally, lived in Montreal for seven years and is a Canadian citizen, while Chris, the other owner, is an American with the travel and gourmet bug.)

Before my lunch arrived, I was served a big glass of water, totopos and a tasty salsa that was not picante. The combination poutine and vurguer that I ordered (called the Bi-Combo, for 139 pesos) came surprisingly quickly, despite the fact that I had changed my choice of gravy from ratatouille to Tokio (made with carrots, tofu and ginger). The vurguer garnishes—purple onion, lettuce and tomato—were vibrant and fresh, and the vurguer itself (a fried, multigrain mixture) was also nice, a bit like falafel. Peanut oil is used for frying, which is a better option than some other oils, Antonio said.

Having never before sampled poutine, which reportedly dates from the 1950s, I cannot advise aficionados as to how Pinche Poutine’s measures up. Besides, the veganism and the Tokio gravy, not to mention the underlying mixture of potatoes and yams I ordered, surely made my poutine a horse of a different color. But it was served with pride, speed and friendliness, as well as great willingness on Antonio’s part to explain every nuance of every dish.

The restaurant features a line of Mexican fruit soda, called Velvet Soda, which I recommend. The maracuya variety I had (45 pesos) was distinctively maracuya-ish and not too sweet. There are desserts too, such as the Italian favorite cannoli or platano macho dressed with chocolate or strawberry jam.

Pinche Poutine does not yet accept credit cards, Antonio noted. The prices for the labor intensive offerings, while not as economical as a street-corner taco, are not steep.