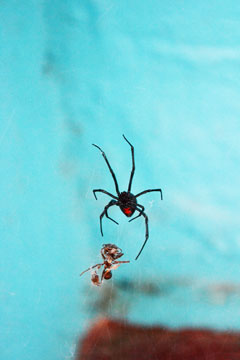 Love them or hate them, spiders are the largest group of venomous animals. The worldwide spider catalog of the Planetary Biodiversity Inventory lists 40,024 different identified spider species.

Only three of the spider families are not venomous: Liphistiidae, Holarchaeidae, and the Uloboridae. The Uloboridae are the only of these non-venomous spiders living in the Americas. All other spiders here or north of the border are venomous. The ArachnoServer spider toxin database lists 916 toxins, and 48 different known mechanisms of action.

There are four factors that make a spider clinically significant and potentially dangerous: the ability to penetrate skin, the power of the toxin, the amount of the toxin, and how the toxin affects humans. Most spiders cannot penetrate human skin. That eliminates most of them as a threat, except those that can spray their toxin.

The Green Lynx spider common at lakeside can both inject its toxin and spray it up to 20 cm which would only cause great discomfort if sprayed directly into the eye.

The power of the toxin excludes most spiders from being dangerous to humans. However, the power of the toxin must be considered in relationship with the amount. Consider the Brown Widow spider which has venom three times more toxic than the Black Widow. We must take into consideration that the Brown Widow injects only about half as much venom (0.10mg vs. 0.19mg) as the Black Widow (Loxosceles reclusa). Consider also that although the Brown Widow is technically more toxic, clinical reality is that the Black Widow bite has more systemic effects. The Brown Widow might be more dangerous to a small animal, but in humans, the effects do not usually spread far from the injection site. Black Widow toxin can spread throughout the whole body and even inhibit breathing, making it the most hazardous spider at lakeside.

The Black Widow spider may have red markings on the back, but will always have a bright red hourglass shape on the abdomen. The male is less black and smaller than his mate, and he usually cannot bite through human skin.

Spiders can be take on more danger because often victims don’t realize that they have been bitten, and usually don’t know what caused the bite. By the time they come to Cruz Roja they are experiencing symptoms including a pin prick feeling at the time of the bite (if noticed), and painful cramps in a large muscle groups such as the thigh or abdomen near the bite.

The Brown Recluse takes second place on the lakeside danger list due to the ability of the venom to cause necrosis. The bite of the Brown Recluse can present with a sore or ulcer after the bite or it may have no symptoms at all. Other spider bites may cause some pain at the site, or itching. Other insects may produce burning and pain. Any bite or sting can produce an allergic reaction which can also be a threat even if the toxin’s main effect is not. 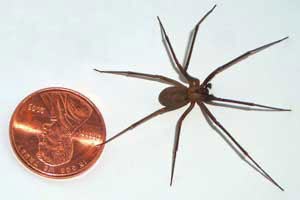 There are many other spiders including Jumping Spiders and Lynx Spiders that are toxic and common at the lakeside, but not dangerous. The most common of these reactions can be from the Paederus (Staphylinidae). From my experience I’ve noted that it produces a substance that causes cells to separate from each other, resulting in a first to second degree “burn”, which could be mistaken as a Brown Recluse bite.

What to do if you suspect you’ve been bitten by a spider. If you know it is a Black Widow, or have symptoms of a Black Widow bite, go to a doctor or clinic that has the anti-venom on hand. Call before you go to make sure they have it in stock

If you assume you were bitten by a spider, but are not sure, and have strong symptoms, keep in mind that there are hundreds of other toxic insects here. It is best to seek medical attention with someone who has experience in toxicology.