From the 1890’s through the early decades of the 20th century, Chapala was renowned as an Easter season vacation playground for Mexico’s high ranking politicians, diplomats, business leaders and the crème de la crème of Guadalajara society.

Although the town lost much of its luster after the lake’s crisis years in the late 1940’s, it has remained a popular holiday destination among Tapatios of all socio-economic levels.

As thousands of visitors are expected to pour into the area over the next two weeks, those seeking something more edifying than family picnics and wading in Lake Chapala’s shallow waters will discover fascinating insights into local history revealed in the numerous landmarks spread throughout Chapala’s tourist zone.

An appropriate place for setting off on a self-guided tour is La Ribera del Lago de Chapala, the long mural located on Avenida Hidalgo, two blocks west of the city’s main intersection, painted in 2009 by Ajijic artist Javier Zaragoza. The work comprises eight panels that portray Chapala history and daily life from the pre-Hispanic era to the present. 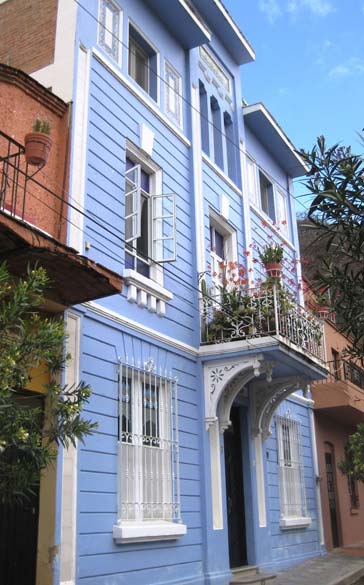 Cross the street to the Plaza La Vela, location of the municipality’s tourist information module,  to begin a leisurely stroll along the Malecon.

Glancing to the west, see Villa Ferrara, one of several waterfront mansions built in the early 1900’s following the subdivision of the sprawling Villa Tlalocan estate once owned by British Consul Lionel Carden.

Then head eastward passing by the palapa covered El Quetzal restaurant, original location of Chapala’s public baths and laundry facility and the later La Pantera Rosa, the dining and dancing hot spot of the 1970’s.

Next door is Villa Paz, also known as the Casa de los Mangoes.  Built by Guadalajara attorney Alberto Arce, the house is distinguished by its broad structure, tall central tower and an architectural style reminiscent of the New Orleans Latin Quarter.  Following many years of abandonment, the magnificent property is currently undergoing renovation by Canadian owners.

A few steps beyond is the Lake Chapala Inn, the former Villa Aurora where Norwegian adventurer-entrepreneur Christian Schjetnan made his home in the early 1900’s while engaged in various commercial ventures aimed at turning Chapala into an international  resort destination.

A quick detour around the corner onto Calle Aquiles Serdán takes you to Mi Pullman, the quaint Victorian style townhouse built by renowned architect Guillermo de Alba as his Chapala vacation home and work headquarters during the construction of the town’s most outstanding architectural gems. It was beautifully restored by the British settler who purchased the property in 2008.

Back to the corner at the Malecon stands one of Chapala’s earliest waterfront mansions. The imposing three-story edifice was built by Manuel Capetillo Villaseñor, scion of wealthy and powerful landowners in the region of the Hacienda de Atequiza. As the house passed through different hands, including Guadalajara’s prominent Gonzalez Luna family and its current American owners, the structure has been transformed to take on the appearance of a great ship nestled at the edge of the lake.

Down the way is a statue of Mike Laure, lead musician of the 1960’s rock band Los Cometas, whose career was kick-started by regular appearances at the original Beer Garden,  previously situated at today’s Perla Negra restaurant.

The new Beer Garden  (former Mirador Restaurant), occupies the ground floor of what was originally the Hotel Arzapalo, Chapala’s 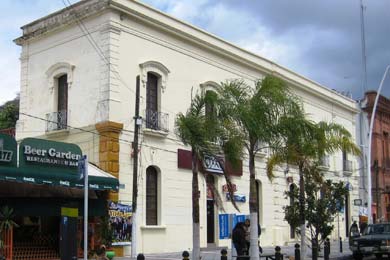 Just outside the Beer Garden is the Zalate de Felisa, an age-old endemic tree of the fig family, famed for shading the stand of flavored shaved ices dispensed by a beloved sidewalk vendor.

Moving on to the median strip running down the center of Avenida Madero is an old stone fountain and resting spot recently refurbished as El Camino de Natalia, in tribute to the late Natalia Gomez de Cuevas, a distinguished Chapala philanthropist whose family founded the Beer Garden and operated the Hotel Nido in the final years before it was acquired by the municipal government to become city hall.

Crossing over to the east side of Madero, find the Parroquia de San Francisco. Constructed in the middle of the 18th century, it replaced Chapala’s first Catholic temple, built in 1548. The church’s cantera stone façade was added during renovations in the 1960’s. The symmetry of its once identical bell towers was altered at that time, due to structural and financial issues that arose before enlargement of the south tower commenced. 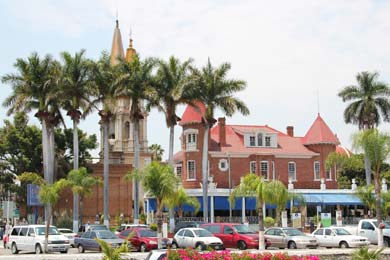 Next door, at the corner of Paseo Ramon Corona is the Cazadores Restaurant, located on the site of the ancient Franciscan monastery. Construction of the singular structure was initiated in 1903 by illustrious Jalisco historian and political figure Luis Perez Verdia. Built almost entirely from materials imported from Europe, right down to the brick, it was completed several years later by second owner Albert Braniff, pioneer of commercial aviation. In 1970 the property w 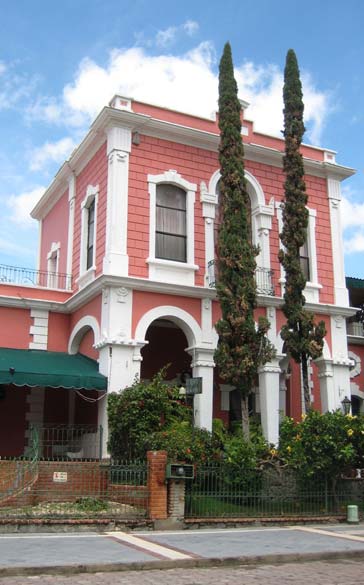 as converted into a branch of Guadalajara’s popular Cazadores Restaurant chain. Take a peek inside at vintage interior décor and assorted antiques.

There’s plenty more to see on the east leg of the Malecon, starting at the Fuente de Pescadores, the fountain graced with cantera sculptures that was constructed in the 1990’s in tribute to Chapala fishermen. Head off to the pier, built in 1829 and renovated in multiple times to the present. Inside the lighthouse, admire the ceiling murals depicting Chapala history, painted in 2007 and restored in 2013 by Miguel Mora de la Torre.  Out in the marshy wetlands is the Jesus Pescador sculpture erected in 2009.

Continuing east, see the recent additions of the skateboard park and outdoor forum with a stage area shaded by another sail-shaped tent. From the row of seafood restaurants at the far end, double back to Ramon Corona for a glimpse of Casa Ochoa, an elegant two-story building painted in dusty rose with white trim, the grandfather of waterfront mansions built in 1895 by Carlos Ochoa Arroniz.

At Calle Zaragoza veer off a half block on to view Quinta Quezalcoatl, the luxurious inn where famed British author D.H. Lawrence lived in the early 1920’s while he wrote “The Plumed Serpent.”

Finally, mosey by the Hotel Villa San Francisco at Ramón Corona 16, another former vacation home converted into a boutique hotel. The front gate is said to have originally been owned by President Porfirio Diaz, the long-time dictator whose frequent holiday vacations in Chapala help spark the rage that turned the town into a prime Easter season destination.