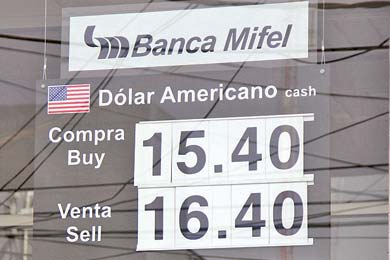 In addition, negative domestic news has affected the currency, some say.  This includes the escape of drug kingpin Joaquin “Chapo” Guzman from a maximum-security prison and the disappointing results of Mexico’s first-ever auction of oil and natural gas tracts, which were snubbed by most international energy producers and accrued just two offers.

The peso’s downward trend of the past week continued Thursday, finishing at 16.16 to the dollar by the end of trading.

Most economic forecasters believe the peso will weaken further if annual growth rates are revised, oil output drops and public expenditure is reduced any more.

Analysts also say any additional drop in oil prices will put greater pressure on the peso.

Mexico’s Central Bank Governor Agustin Carstens has stressed that the peso will strengthen once market turbulence over possible rate increases by the U.S. Federal Reserve bank has receded.

While imported merchandize will cost more as the peso slides, the adjustments will have a beneficial effect for exporters – the auto sector in particular – and boost tourism.

Meanwhile, the National Institute of Statistics and Geography said Thursday that the annual inflation rate of 2.76 percent recorded during the first half of July was the lowest rate since 1989.