According to two dispassionate, bored teenagers manning a t-shirt stall, the Tiangius Cultural next to downtown Guadalajara’s Parque Agua Azul has been going down every Saturday for about 30 years.

That’s a lot of matchbox cars and spiked dog collars.

In case you’re unfamiliar with the concept, a tianguis cultural is simply an open-air market where all and sundry is available.  At the iteration just outside one of the city’s largest urban parks, offerings include native handicrafts, Star Wars figurines, used books, bootlegged DVDs, and a huge amount of clothing and accessories that offer a potential buyer the opportunity to pass for a late 1970s London punk, an 1980s New York downtown New Wave art school drop-out, or a sun-allergic denizen of Seattle in the 1990s.  And that’s just a small slice of the tianguis’ inventory at which you can throw your hard-earned currency. 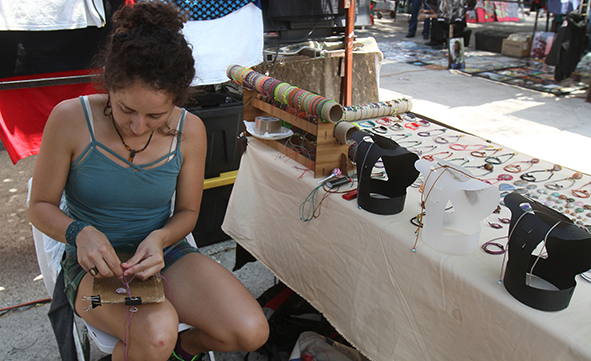 Guadalajara’s bus system being what it is – a mind-boggling but extensive and functional maze of convolutions – you can arrive at the tianguis from any number of directions using any number of public conveyances.  I, a trembling neophyte on the gritty streets of Jalisco’s capital, found my way there with relative ease aboard one of a multitude of belching fireplugs that roars down Avenida 16 de Septiembre to and from the city’s centro historico.  While the tianguis really hits its stride around 2 p.m., if you want to avoid the worst of the day’s wilting heat and the busiest throngs, getting there between 10 and 11 a.m. is a wise strategy; your feet are in less danger of being trod upon by pitiless bargain hunters, and your ribs needn’t fear the flying elbow of a hard-charging abuela possessed of a terrifying single-mindedness of purpose. 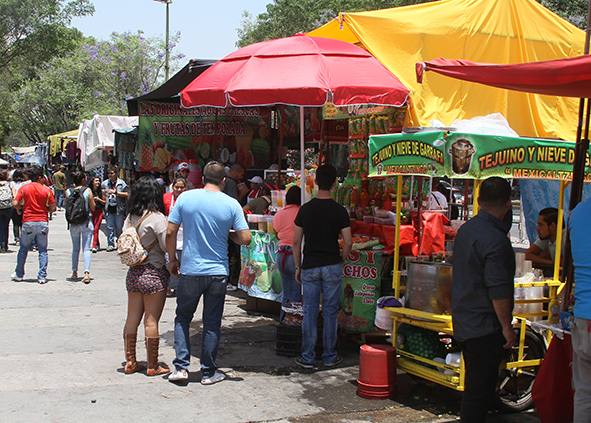 Actually, the demographic at this Saturday’s festivities skewed a lot younger than abuelas and abuelos; the majority of attendees were teenage nietos and nietas (grandchildren) loitering or shuffling around in tight groups trying to look as disaffected and aloof as possible while constantly tugging on or adjusting ripped denim pantaloons, band t-shirts and coiffeurs of carefully-managed dishabille.  The tiangius has clearly calibrated its wares towards the wallets and purses of this flock of young consumers; a series of rough appraisals by different observers would probably yield similar opinions regarding the overwhelming dominance of vendors selling head shop apparel and paraphernalia.

These young Tapatios, uniformly pierced, tattoo’d and draped in frayed blacks and greys, were out in force at the south end of the tiangius at about 3 p.m. for a set by El Disturbio, a band of around ten young musicians equipped with electric guitars, brass and reed instruments, and a set of drums.  The singer’s t-shirt handily described the resulting phonics as ska-core: fast, loud, syncopated and aggressive music with a strong emphasis on the upbeat. A swirling mosh pit of sweaty, flailing limbs coalesced in short order below a giant white obelisk looming up from behind an equestrian statue of Benito Juarez.  The brooding husk of a flamboyantly defunct apartment building across Calzada Independencia completed the picture, the majority of its windows busted out and the entirety of its surfaces covered in graffiti expressing a generalized hostility towards life, the human race and, probably, bunny rabbits. 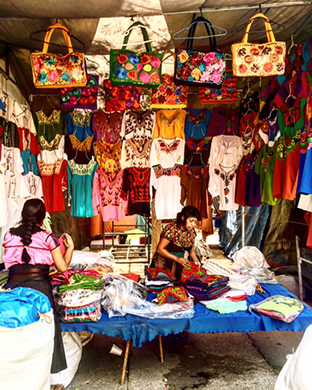 Lest, dear readers, you think there’s nothing at the tianguis for the 35-and-above set who find youth culture deeply annoying, I cautiously encourage your attendance; the frenzied revelry by-and-large obeyed the dictums of basic decency and the band’s cacophony, actually quite tuneful and coherent, was kept 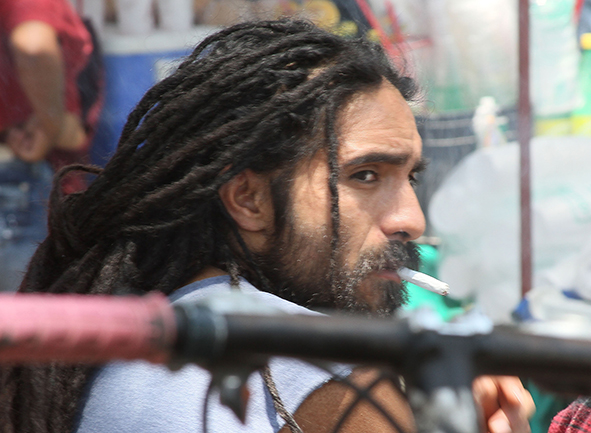 to a reasonable decibel level. Also, a small wealth of enterprises offering comestibles and libations (non-alcoholic) were clustered on either side of the concert space, including El Cultu, a marvelously efficient al fresco taco kitchen with tables and chairs

upon which to rest your worn out strolling muscles, and several stands stacked high with family-sized bags of chicharrones, popcorn and potato chips to suck the moisture out of your already sun-parched body, to be rapidly replaced by a galaxy of colorful agua frescas.

Of course, in the end it’s about the stuff.  In our age’s obsession with all manner of insubstantial digital tomfoolery, it was strangely heartening to see acres and acres of Matchbox and Hot Wheels cars; vast armies of plastic figurines lovingly scrubbed and arranged according to some obscure but exacting aesthetic criteria; and, of greatest interest to me personally, boxes and boxes of 7-inch records grouped in categories like space jazz and lounge metal.  More endearing still was the visible, un-ironic enthusiasm shown for these artifacts.  While the world’s heaping trash dumps may offer a succinct visual rebuttal to the following statement, I believe things are beautiful.  They have meaning.  A man is rarely sustained by abstractions alone; he needs objects he can grasp and feel to embody those abstractions. The next time I attend – and I have every intention of doing so – I hope to see more examples of this fascinating, passionate totemism and less Black Sabbath t-shirts.