Neighbors in Tonala witnessed a surreal sight this week after a thief stole an SUV without knowing that a five-year-old girl was asleep in the back seat. 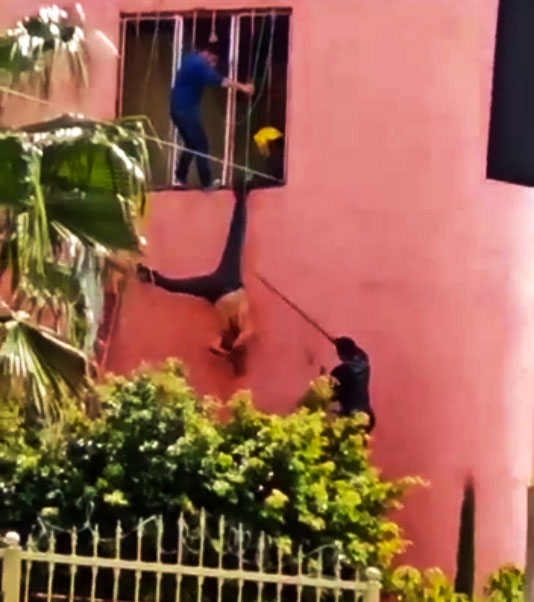 Municipal police patrols were quickly notified and managed to locate the 1995 Ford Ranger, which the thief abandoned, thankfully leaving the young girl unharmed.

With cops in pursuit, the thief fled into a church, where he climbed several floors to the roof of the building.

Cornered by officers, the desperate thief threatened to throw himself to the ground. Police and firefighters spent two hours trying to persuade the man to desist and give himself up. During this time they managed to fix a rope around his foot.  Eventually, the distressed thief decided to jump off the roof but found himself dangling upside down from the rope. Subsequently, a police officer who had climbed up the outside of the building began to hit him – for an unknown reason – with a broom stick.  A crowd that had gathered below to watch the unfolding drama began to chant: “Dale, dale, dale, no pierdas el tino, porque si lo pierdes, pierdes el camino!” – a song that is traditionally sung when someone is whacking a piñata.

The extraordinary behavior of the Tonala police officer is under investigation, a municipal spokesperson said.

Police eventually released the thief from his predicament, and turned him over to the Ministerio Publico.