President Andres Manuel Lopez Obrador debuted yet another new initiative this past week in Mocorito, Sinaloa, this time promoting literacy under the #EstrategiadeLectura hashtag. The objective is simple: to encourage reading among his constituents. 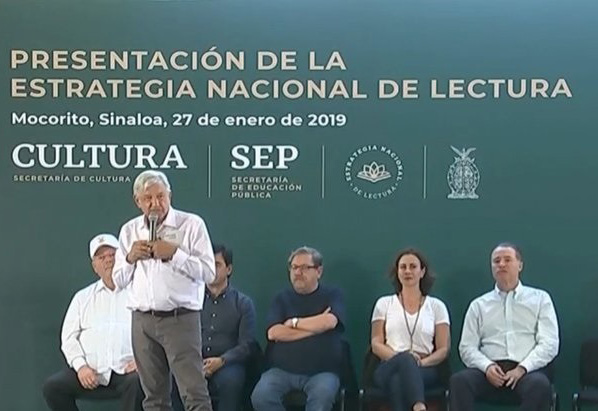 One mandate involves equipping 130 bookstores across Mexico with equipment to produce a collection of government-sponsored books called “Viento del Pueblo” (Village Wind) with prices beginning at ten pesos. This is expected to increase accessibility, lower transportation costs and create incentives to read.

“We are going to make books so cheap, we are going to give them out,” said Paco Ignacio Taibo II, a prominent Mexican writer who works as the editorial head of Mexico’s Economic Culture Fund. “And not just that, we are going to force the whole publishing industry to lower its prices, co-publishing with them and substituting imports.”

In the grand scheme of things, supporters suggest that a more “literate” Mexico would foster a more amicable society.

“Literature can give us peace, it’s a vehicle for peace,” said Dr.Beatriz G. Mueller, honorary president of Advisory Council of the National Coordination of Historical and Cultural Memory of Mexico, during the event. “Nobody that’s reading is hitting, kicking or abusing anybody.”

According to a UNESCO index, Mexico ranks 107th out of 108 countries when it comes to literacy. To rectify this, officials plan to showcase more literature-centric programs in the media while also working more closely in schools to advance literacy. In the end, this is all about rebuilding the community.