Delivering his first annual “informe” (state-of-the-nation report), President Andres Manuel Lopez Obrador insisted that the “Fourth Transformation” of Mexico is proceeding as planned, while admitting more work is needed to grow the economy and reduce insecurity and violence. 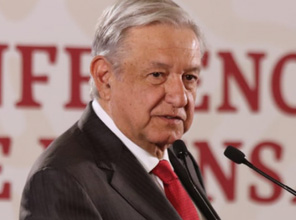 The goal of separating the political and economic power elites in Mexico is well on track, the left-of-center leader declared during a 90-minute address in the Presidential Palace last Sunday.  The campaign goals of putting the poorest people in Mexico first, and ending decades of institutionalized corruption are being implemented and the people are happy about this, he stressed.

To some, however, the upbeat message resembled those of dictatorial presidents of the past, who usually refused to acknowledge where their administrations might be failing.

At least Lopez Obrador mentioned that the country is not growing enough, and that insecurity is still a problem.

The economy has completely stagnated in the first half of 2019 with zero growth, and homicides are up significantly over last year during the same period.

About 2,000 protestors marched and congregated at the Angel de la Reforma monument to protest the direction Lopez Obrador was taking the country.

Some media outlets, which have faced Lopez Obrador’s wrath after voicing criticism of his presidency, had little positive to say about his first eight months in office.  “Authoritarian,” “improvised,” “an anthology of promises,” “the same old vices,” were some of the descriptions used by Diego Fonseca in an commentary piece in the New York Times,

During his address, Lopez Obrador ran off a list of what he considers to be the main achievements of his presidency to date.  Chief among these were:

- Increase in the minimum wage of 16 percent.

- Scholarships for ten million children, through an investment of 60 billion pesos.

- Creation of a National Guard that will eventually replace federal police force.

- Annual inflation (as of June) kept down to 3.8 percent.

- Elimination of all luxury expenses for government officials.

- Scrapping of pensions for former presidents

- Sale of 71 government aircraft, including the presidential plane.

- 18 billion dollars in foreign investment in first semester of 2019.

- Opening of 100 free universities in marginalized regions of Mexico.

- Cancellation of polemic education reforms passed during his predecessor’s administration.