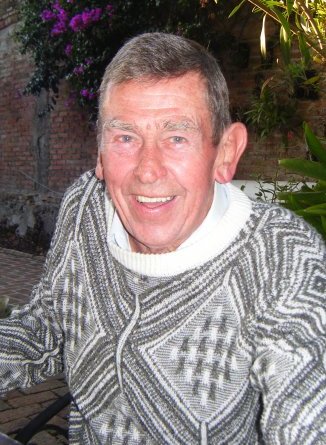 Kaye was born April 14, 1930 in Menominee, Michigan, the second child born to town doctor John Tracy Kaye and his wife Loretta (neé Couture). At age five his mother succumbed to a prolonged illness.

In 1937, his father traveled to Mexico City to attend an event as president of the Upper Michigan Peninsula Rotary Club. While there he struck up a romance with Margarita Piña Cortazar Ayayo who would become his bride a year later. Kaye’s stepmother became a guiding light in his life, and annual trips to Mexico to visit her family led to his decision to make the country his home in retirement.

After finishing high school, Kaye earned a degree in economics at the University of Michigan. Following graduation, he enlisted in the Army, serving honorably in the Korean War. In 1958 he married Mary Gray, settling in New Orleans, where he was employed at the Dow Chemical Company. After the birth of their first daughter they moved back north to Mundelein, Illinois, commuting from there to Chicago where he worked at a school supply company owned by his father-in-law Harold Gray in partnership with his son Robert. Kaye and his brother-in-law later opened a store handling merchandise for teachers.

Around 1970, the Kayes and their four daughters relocated to Chicago where he got involved in charity work, running bingo games at the historic Aragon Ballroom to support the Saint Thomas of Canterbury Parish. They were also active with Hull House, located in their uptown Chicago neighborhood.

In the mid 1980s Kaye sold his business and retired to the Chapala area, after which he and his wife split. Not one to be idle, he dedicated the rest of his years to good works for the benefit of the Mexican people.

As a volunteer for Jocotepec’s Lakeside School for the Deaf (now the School for Special Needs), he served as maintenance and landscaping supervisor, headed construction of a basketball court, and coached students to many victories in the Jalisco Olympics for the Deaf. He was also a staunch supporter of Niños Incapacitados and the Chili Cookoff.

One of Kaye’s greatest accomplishments was spearheading the construction of eight modest homes for families displaced from the ruins of Chapala’s former railway station, when it was taken over by the state for renovation as the Centro Cultural González Gallo.

His philanthropy was recognized with the 1994 Social Project of the Year award and 1996 Man of the Year trophy, among other acknowledgements

Kaye is survived by daughters Tracy Kaye (John Talian) of New Jersey, Molly (Rick) Walsh of Illinois, Jaime Kaye of Colorado, Margery (Ian) Tunnett of Arizona, along with his former wife Mary, nine grandchildren and numerous nieces and nephews.   He also leaves behind his devoted caretakers, Pedro and Ramón Quiñones, and many other cherished friends and admirers.

A celebration of his life is tentatively planned for February 15, time and place to be announced, followed in April by a festive 90th birthday party to be held in his absence.