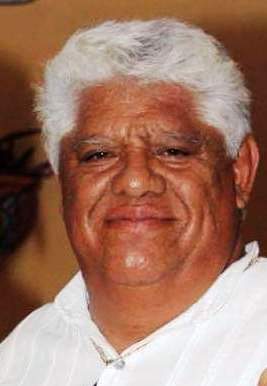 He was born on June 5, 1952 in Etzatlán, Jalisco, the only son of Gilberto García and Josefina Andalón, whose surname he assumed. At the age of 11 he took up residence in the state of Nayarit with an older step-sister and her husband, a butcher who took the boy under his wing to learn the trade. He moved to Chapala in 1970, landing a job at the meat counter of the town’s only supermarket at that time. He married Hermila García Pedroza two years later.

In the mid-1970s he decided to seek his fortunes in the United States where he found employment in the meat packing industry. Returning to lakeside, in 1985 he opened his own butcher shop, Tony’s Plus Carnecería, in San Antonio Tlayacapan, next door to SuperLake. Recognized by clients for quality products and top-notch customer service, it was the first building block of the local food service empire he and his family started up from scratch.

Andalón began branching out next door with the Original Tony’s restaurant, established in 1998, offering a menu specializing in meat platters and selected wines. It was there that the amiable host explored his talents as a vocalist, teaming up with regular pianist Roberto Ortiz to entertain diners. In 2007, the duo recorded a CD titled “Pensando en Tí,” featuring 14 Mexican romantic melodies.

Expanding again in 2017, he started Tony’s Campestre Bar and Grill on the outskirts of San Nicolás de Ibarra, which operated until last year when he sold the business. By then, his three adult children were following in his footsteps. Eldest son Antonio Cesar now runs the butcher shop. Middle child Abraham owns Tony’s Pollo Frito, with one outlet in San Antonio and another in Chapala. Daughter Anabel, the youngest, is a culinary school graduate, chosen by her dad to take charge of Original Tony’s.

Andalón was a man of wide interests and multiple talents. He studied martial arts, reflexology and massage therapy, preparing him to moonlight as a masseur at a local spa prior to turning restaurateur. Back when the local Mexican National Chili Cookoff was held under the auspices of the International Chili Society, his butcher shop was the go-to shopping place for top competitors coming here from the United States. He was brought aboard in turn as the chili contest’s head judge during that era.

With his passing, Andalón leaves behind his wife and children, along with the many friends and admirers who appreciated his generosity, kindness and gregarious nature. He was honored at a memorial Mass held Monday, February 8, at Chapala’s San Francisco parish.