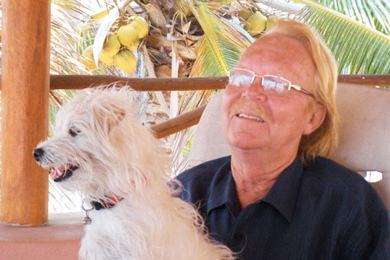 Friends of Barra de Navidad resident Ron Lloyd Mackintosh  are concerned after he has not been seen for 12 days.

The Canadian expatriate was last seen around 5:15 p.m. on Sunday, October 21 on Calle Gomez Farias in Melaque, where he dropped off a friend in his black 2008 Jeep Patriot (British Columbia license plate: 506CNT).  Friends say he intended to drive home but never arrived. His live-in girl friend reported him missing to police on Monday, October 22.

Mackintosh had his dog with him at the time of his disappearance. No clothes or luggage are missing from his home.  Friends say they have checked hospitals, jails and other institutions but found no trace of him.

Canadian authorities have been notified but refuse to comment on the case without the consent of  Mackintosh’s next of kin.  They did, however, suggest that an investigation was in process, although friends of Mackintosh say local police seem rather disinterested in the case.

Anyone with information should call the Department of Foreign Affairs and International Trade Emergency Watch and Response Center, Ottawa, Canada. From Canada: 1-800-387-3124. Collect calls: 1-613-996-8885.   Or fill out the online form at www.voyage.gc.ca/contact/menu-eng.