The U.K. in Mexico and Mexico in the U.K. year of cultural, social and business exchanges is gathering steam with the openings of two first-rate exhibits in both countries, and esteemed Mexican scribes feted at this week’s London Book Fair.

Recently inaugurated at the Museo Nacional de Arte in Mexico City is an exhibit featuring a selection of landscapes from the mammoth collection of the Tate Britain. Among Brits featured in this first-rate show are artistic luminaries such as Joseph Mallard William Turner, John Constable, Thomas Gainsborough and David Hockney.

Meanwhile, the Tate Liverpool is hosting a retrospective of works by the late, highly acclaimed British-born artist Leonora Carrington (1917-2011), who spent much of her adult life in Mexico. Carrington, a debutante from a rich Lancashire family, eschewed her privileged background to join the surrealist movement in Paris in the late 1930s. She developed a romantic relationship with artist Max Ernst, who was forced to flee to the United States after the Nazis invaded France.

Carrington suffered a nervous breakdown and ended up at the Mexican embassy in Lisbon, from where she took a boat passage to Mexico. 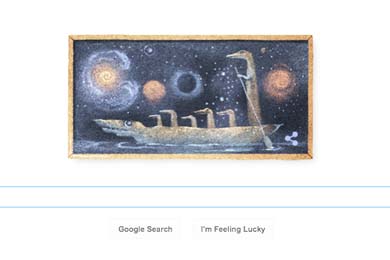 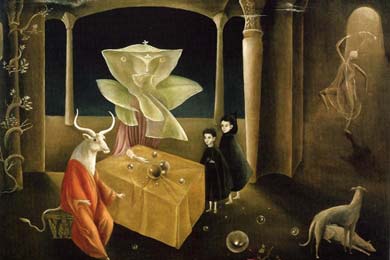 While celebrated for her contribution to art, and surrealism in particular, in Mexico and the United States, it has taken time for her talents to be recognized in the country of her birth.  The current show in Liverpool features 100 works, including paintings, drawings and sculptures, that will help put that anomaly firmly to bed. (The exhibit is up until May 31.)

Meanwhile, installations by two contemporary Mexican artists, Carlos Amorales and Debora Delmar, have opened at the Turner Contemporary in Margate and the Modern Art Museum in Oxford.

The exchanges with Mexico the invited country at this week’s London Book Fair, an honor that will be reciprocated in December when the United Kingdom is guest of honor at the much larger International Book Fair in Guadalajara.  Traveling to London for the April 14-16 fair were 11 esteemed Mexican writers, including Elena Poniatowska, Enrique Krauze, Juan Villoro and J

orge Volpi.  The line-up of British authors coming to Guadalajara is still in the planning stage but should, insiders say, be replete with household names.

A treat next month in Guadalajara is the annual Festival Cultural de Mayo, at which the United Kingdom is the guest nation.  An assortment of high-quality performers is slated for shows at the Teatro Degollado (check Performing Arts page in upcoming editions of this newspaper for further details). 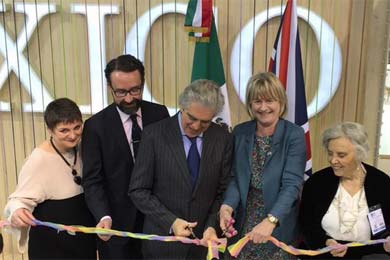 Looking ahead, in a much anticipated event scheduled in June, artist Frida Escobedo will create a giant replica of the Aztec city of Tenotchitlan in the central patio the famed Victoria and Albert Museum in London. The display will be up for four months.

Mexican filmmakers will be screening their movies at the Sheffield and Edinburgh film festivals in June, Mexican wrestlers will showcase the drama of lucha libre in the regal surroundings of the Albert Hall in July, and the feted Amalia Hernandez Ballet Folklorico troupe from Mexico City will perform at the London Coliseum, also in July.   Alondra de la Parra (a former director of the Jalisco Philharmonic Orchestra) is slated to conduct the London Philharmonic in November.

Meanwhile, an interactive multi-media pavilion has been installed on the South Bank of the River Thames in London

where visitors can take a visual journey around Mexico’s 32 states and also see the famous “Volcho” (VW bug) decorated with two million chakira beads by the indigenous Huichol people of Jalisco and Nayarit.