In a long-awaited announcement appropriately trumpeted by a publicity image of a French horn and two bluebirds of happiness, the Jalisco Symphony Orchestra has announced a five-program season in June and July in its home, the acoustically excellent Teatro Degollado in the center of Guadalajara. 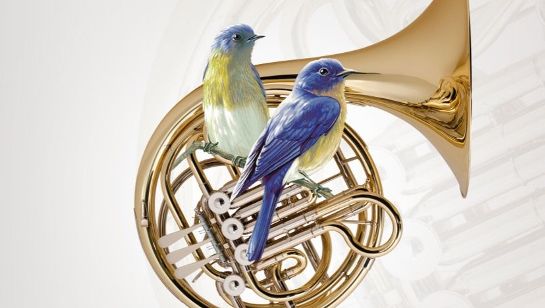 The Thursday, June 17, concert (8:30 p.m.) will mark the first time the 88-member orchestra has played to a live audience at its home venue in 14 months. Ticket prices are unchanged, and many resident foreigners will find them inexpensive at 90 to 250 pesos.

Only 300 tickets will be sold for each concert, so seating will be spaced out in the Degollado Theater, which has a capacity of 1,027. In addition, programs last just one hour. All five will be performed twice each, Thursdays 8:30 p.m., and Sundays 12:30 p.m. (Thursday night of the second program will be at Conjunto Santander de Artes Escénicas on the city’s north edge.)

In further nods to the pandemic, no guest soloists are slated this season and Jesus Medina, musical director since 2019, will direct most concerts, ceding the baton to Enrique Radillo for one program, while one other will consist of several chamber groups, including two percussion groups.

The first program consists of work by Mozart and Haydn and Beethoven’s sometimes cheerfully loud Symphony No. 8. Subsequent programs feature opera overtures, other pieces by European composers and a sprinkling of Hispanic composers.