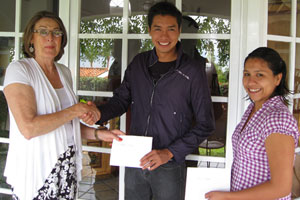 They include Ajijic’s Emmanuel Medeles, the conductor and teacher of the CREM orchestra, who will be able to continue his studies at the University of Guadalajara.

Other University of Guadalajara recipients are Areli Medeles of Ajijic and Ivan Morales of Guadalajara, who study the cello and piano respectively.  Awards have also gone to Eduardo Garcia of San Antonio Tlayacapan towards the purchase of a professional cello and Francisco Bedoy of Autlan to continue voice performance studies at the University of Kentucky. (Bedoy will perform at the VIVA la Musica! membership party in December.)

The first art show of the season at Galeria Sol Mexicano will open Saturday, October 1, 5 p.m.

Lakeside resident and artist Gerry Krause will have his unique, abstract work (he refers to it as “abstract surrealism”) on exhibition and for sale. Turn up and talk to the artist. The show will be in the gallery for two weeks.

Lakeside Little Theatre opens its 47th season with “The Kitchen Witches” written by Caroline Smith and directed by Roger Tredway. The run is from Saturday, October 1 through Sunday, October 9 with curtain time at 7:30 p.m. (except for Sundays when the matinee begins at 3 p.m.). Tickets are on sale every day (except Sunday) from 10 a.m. to noon. The box office also opens one hour before show time. Contact the box office at 766-0954.

The Ajijic Society of the Arts (ASA) has changed its meeting place. The group will meet Monday, October 3, 10 a.m. at La Bodega Restaurant, Calle 16 de Septiembre 124 in Ajijic. Rick Present, an artist in encaustic and acrylics, will give a demonstration. Get there early for coffee at 9:30 a.m.

The group’s first priority is to arrange juried shows. To that end, interested painters will want to attend a meeting on Friday, October 7, 2 p.m. at La Nueva Posada in Ajijic. They should bring a one-page profile containing a biography, photo and examples of two or three of their original works.

A juried show is one in which a “juror” or “judge” decides whether a piece of artwork is worthy of being shown in a particular show. The accepted entries may then also be judged and awards presented when funds or sponsors are available. The process is believed to bring involved artists to greater and greater skill as they compete.

The first two meetings of the Painting Guild were held on August 4 and September 22. Many ideas have been floated and members must volunteer to bring the ideas to fruition.

The guild is for painters and paintings only. No photography or digital images will be accepted.

Galeria Origen y Vision, located at Hidalgo 229 (on the Carretera leading into Chapala), will open with an exhibition on Saturday, October 8, 5-9 p.m. The gallery is intended as a new space for contemporary expression with art classes, performance art, action painting, music, dance, literature and poetry readings and other exciting happenings.

The gallery will offer rotating exhibits with varying themes and guest artists. The initial exhibition will be a collective show, featuring paintings, sculpture and limited-edition original prints from numerous internationally-known artists.

Everyone is invited to the opening reception to enjoy the art and music provided by Sistema Sonoro Selecto. For additional information call 045-331-145-8306.

Regular hours for the gallery will be Thursdays through Mondays from 11 a.m. to 7 p.m. and by appointment.

The second event to raise money for the Jim Collums Educational Fund will be held Tuesday, October 11, 4-6 p.m. on the back patio of the Lake Chapala Society (LCS).

The program will include music from Rentaria’s “Talisman” World Tour that includes “Gypsy Rock,” “Nights in Seville,” “La Malaguena” and “Legend of Zorro,” which he wrote for the movie.

Tickets are 150 to 250 pesos and are on sale now at the Lake Chapala Society from 10 a.m. to noon, at Diane Pearl’s, Charter Club Tours and the Auditorium.

This is a benefit concert for the Auditorium Upgrade Project and promises to be memorable. Get there early and take advantage of the cash bar.

VIVA la Musica! is getting ready for the autumn list of “Live from the Met” operas streamed from New York to the Teatro Diana in Guadalajara at midday on Saturdays.

The first is on October 15, for Donizetti’s “Anna Bolena,” and the second is set for October 29 for Mozart’s “Don Giovanni. VIVA needs a head count as soon as possible because tickets must be purchased soon for these very popular musical events. Ticket prices are 320 pesos for VIVA members and 400 pesos for non-members. Contact Marshall Krantz at This email address is being protected from spambots. You need JavaScript enabled to view it. to reserve your spot and arrange for payment.