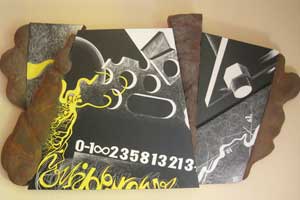 The first exhibitor in the space will be contemporary sculptor Rainer Gocksch. For more information call 766-3372 or email This email address is being protected from spambots. You need JavaScript enabled to view it.. Rainer’s exhibition runs until November 15. Gloriosa is located at Libramiento Plaza Interlago.

Local artist Efren Gonzalez is just back from giving a series of workshops in the United States. Over a period of about 13 days, he talked to more than 1,000 people in Ashland and Medford, Oregon. He had gone there specifically to teach the construction of ceramic murals but ended up talking to people about Mexican art and Mexico in general. He says he was surprised at how little people in that part of the world knew about this country.

Day of the Dead

Coming up for Gonzalez are two artistic celebrations of Mexico’s idiosyncratic Day of the Dead holiday.

The Gonzalez Art Center (Marcos Castellanos 7, Ajijic) shows altars honoring the dead, as well as some of his new paintings and others by kids from his free daily art classes. The exhibition opens Sunday, October 31, 3 p.m. and will be in place through November 2.

The celebration moves to Actinver-Lloyd Ajijic on Monday and Tuesday, November 1 and 2. The altars and the artwork, however, will be different in the two locales.

Gonzalez will begin an oil painting workshop the second week in December. To reach him call (376) 766-5381.

Local artist Ken Gosh holds a “starving artists house sale” at his home/El Gallo Gallery (Guadalupe Victoria 30, Ajijic) on Friday, Saturday and Sunday, October 21, 22 and 23, 10 a.m. to 4 p.m. Gosh will be selling off many paintings from his private collection, folk art, art books and some supplies. Kathy Fallon will be on hand with her original jewelry.

The Ajijic Society of the Arts (ASA) opens its “Soul of Mexico” exhibition on Saturday, October 15, with a reception from 4-7 p.m.  The exhibition will remain up at the Ajijic Cultural Center until October 28.

ASA’s many artists will be outside on the Ajijic plaza on Sunday, October 16 from 11 a.m. to 3 p.m. The Cultural Center is right there, so you can stop by at the art show as well.

Proceeds are earmarked for choir members who want to go on the choir’s next tour but are financially challenged. The songs in the show are from a wide range of musicals, including “Kismet,” “Carousel,” “Jekyll and Hyde,” and “The Drowsy Chaperone.” A new emcee, Allen McGill, will give interesting tidbits and little known facts about the shows and songs. Tickets are 175 pesos and on sale now at the Lake Chapala Society or at This email address is being protected from spambots. You need JavaScript enabled to view it..

VIVA la Musica! is presenting a concert featuring brilliant pianists Rosalinda Preciado and Guillermo Salvador, a married couple that has played together for many years.

The couple’s synergy takes the effect of one added to one to much more than two. When two pianists play simultaneously sitting at the same piano, the work of 20 fingers creates a musical “wave” producing a true pianistic feast. The rich harmonies contrast with multiple melodies intertwining in interesting spirals, permeating the air and the ear.

Don’t miss this. The concert takes place at the Auditorio de la Ribera del Lago on Thursday, October 27, 7:30 p.m. Tickets are 250 pesos for VIVA members and 300 pesos for non-members. They are on sale at the auditorium, at Diane Pearl’s Colecciones, Charter Club Tours and at the door.

Visit the Dia de los Muertos (Day of the Dead) Fiesta and Art Show to be  held at Restaurante Viva Mexico in San Juan Cosala on Wednesday, November 2, from 3-8 p.m. The collective art exhibition will feature paintings, prints and retablos, all specifically dealing with a “Day of the Dead” theme.

A traditional altar will be set up and restaurant owner Agustin will prepare special foods that are typically served on this occasion, including moles, bean tamales, pan de muerto and atole (a special chocolate-based one called champurrado). The cost is just 50 pesos for this special menu. Other drinks such as beer and wine will be extra. This looks like a real treat!

VIVA la Musica is taking bus trips to the upcoming concerts of the Jalisco Philharmonic Orchestra. The schedule is:

Tickets for the bus trips and the concerts are 250 pesos for VIVA members and 350 pesos for non-members. Contact Marshall Frantz at 766-2834 for reservations and to make arrangements for payment.

Local photographer Xill Fessenden will open an exhibition of her recent works on Saturday, October 15, 4 p.m. at Gallery Studio/Arte Contemporanea, Ocampo 61 in Ajijic. The show will run until Saturday, October 29. Both the opening and the closing will hold official receptions. Gallery hours are 11 a.m. to 2 p.m. and 4-7 p.m., Wednesdays through Mondays.

Congratulations to Kenneth Bridges, who has been cast in the upcoming Lakeside Little Theatre (LLT) production of “Greetings.” Bridges was just awarded “Best Actor in a Short Film” at the Tulsa International Film Festival. The film is titled “The Life Smugglers” and was filmed in Chandler, Arizona.