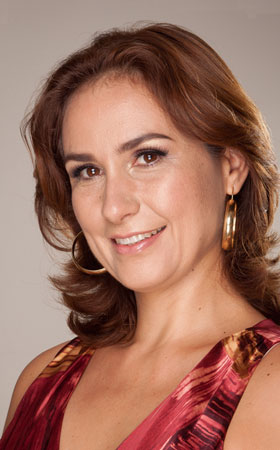 Next week VIVA la Musica! presents another fall season concert featuring Guadalajara-based husband and wife team Rosalinda Preciaso and Guillermo Salvador, who use their four hands at the same piano.

The program includes sonatas by Mozart and Diabelli, as waell as a brilliant “Sonata for Right Hands” by Franco Margola and the Mother Goose Suite by Ravel. The grand finale will be “Fugue and Mystery” by Argentine composer Astor Piazzolla.

The concert is scheduled Thursday, October 27, 7:30 p.m. at Auditorio de la Ribera del Lago in Ajijic.  Tickets are 250 pesos for VIVA members and 300 pesos for non-members. They are on sale now at the Lake Chapala Society, Diane Pearl’s Colecciones, Charter Club Tours and the Auditorium.

Due to the ongoing renovation of Auditorio de la Ribera del Lago, the Music Appreciation Society (MAS) has made changes in its scheduled for the 2011-2012 season. The concerts are scheduled as follows:

December 8: The Children’s Choir of Morelia.

Season tickets are still on sale until October 28. They range in price from 1,100 to 1,700 pesos, dependent upon seating. Tickets for the Tuesday, November 15 concert will go on sale Tuesday, November 1 at the Lake Chapala Society Tickets, Etc. booth and at Charter Club Tours. The price is 300 pesos.

By the way, MAS season ticket holders are invited to the season kick-off party on Friday, October 28 at La Nueva Posada. It’s always a great time and this year could be even better. The featured artists will be harpist Javier Raygoza, accompanied by a quartet made up of a guitarist, bassist and saltiero (Mexican dulcimer) playing traditional Mexican music.

Los Cantantes del Lago, Lakeside’s professionally directed choir, will go to Powell River, British Columbia for the Kathaumixw Choral Festival next spring. To help defray some of the costs for the choristers, Los Cantantes is throwing a “Showstopper” concert on Sunday, October 30, 3 p.m. at St. Andrew’s Anglican Church in Riberas del Pilar.

The program makes for a wonderful afternoon of songs that come from the illustrious boards of the Broadway stage. Some you will know and some you won’t but you’ll love them all. The singers are the same deal – some you know and some you don’t but all wonderful!

Tickets are 175 pesos and are on sale at Diane Pearl’s Colecciones at the corner of Ocampo and Colon in Ajijic and Mia’s Boutique.

Well, not exactly new, but certainly refurbished and remodeled, Galeria de Arte Axixic, located at Rio Zula 1 and Calle Ocampo on the west end of Ajijic, is inviting everyone to the grand opening of the new space on Saturday, November 12, 3-8 p.m. Owner Jesus Lopez Vega will be showing off his latest works and the best from brother Antonio Lopez Vega, Pat Apt, Xilotl, DePaul Durham, Cha Chazaro, Judy Dykstra-Brown, Gabriel Mariscal, Gloria Palazzo, Linda Richards and Kathy Seaboyer. The exhibition will include paintings, etchings, photography, retablos, sculpture and more.

The Lake Chapala Society (LCS) is opening up its grounds for its annual Arts and Crafts Fair on Saturday, November 5 from 10 a.m. to 3 p.m. The day will start off early with a pancake breakfast beginning at 9 a.m. and augmented with Screwdrivers, Bloody Marys, wine, beer and beverages from breakfast and throughout the day.

The kids from the LCS Saturday Art Program will be taking over the gazebo to showcase their paintings and sell their charming cards for all occasions.

The Annual Children’s Art Contest is being held with prizes awarded to there students who have shown the most progress. The exciting new mural being created by Javier Zaragoza and Jesus Lopez Vega will be shown off and a variety of talented local artists and artisans will be on the back lawn displaying their wares. Everything will be for sale. Patron entry is free.

Note: All participating artists and food vendors should turn up at LCS on Friday, November 4, between 3 p.m. and 5 p.m. to set up the tables in their allocated spaces.

This is the same company that presented “Swan Lake” to high acclaim earlier this year. Tickets are 500 pesos and on sale now at Tony’s Plus Restaurant-Bar, Salvador’s Restaurant, Diane Pearl Colecciones and the Auditorium.

In conjunction with opening night for the musical revue “Senior Class at Plaza de la Ribera (formerly Sol y Luna), an art exhibition will open at Rio Bravo 10. The exhibition will include hors d’oeuvres, a cash bar and a wide selection of art including pottery, jewelry, watercolor and acrylic paintings, laser art and much more. There will be a raffle for donated art, with the proceeds going to the Pro-Auditorio renovation project. 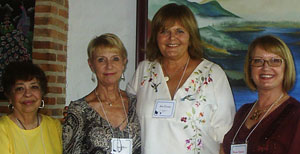 Congratulations to all of the winners at the October meeting of the Culinary Arts Society of Ajijic (CASA). The presentation categories were Pork Main Dish (Category A) and Cheesecake (Category B).

Winners in Judges Category A were Alexandra Gordon for her Mousaka with Sambuca and Goat Cheese in first place, Sally Myers for her Jamaican Sugarshack Pork and Yams and Helena Feldstein for the Garlic Roasted Pork with Tarragon Mustard Sauce tying for second place and Bev Wright for the Swallows Pork and Tomato Stew in third place.

Winners in Judges Category B were Pam Ladd for her Cheesecake Swirled with Lemon and Raspberry Curds in first place; Anita Caldwell for her Rustic Café Au Lait Cheesecake in second place and Joe deLeon for his Peanut Butter Cheesecake with Chocolate Glaze in third place.

The guest speaker at the meeting was Peter Pizzoferato, an olive grower from Italy .

Anyone interested in joining CASA should contact Mary Ann Waite at 766-1436 or email This email address is being protected from spambots. You need JavaScript enabled to view it.. Visit the CASA website at www.ajijiccasa.org.

The Lakeside Little Theatre (LLT) announces auditions for “How the Other Half Loves” by Alan Ayckbourn on Friday and Saturday, October 21 and 22, 10 a.m. in the LLT lobby. Registration begins at 9:30 a.m. Director Dave McIntosh and assistant director Ann Swiston are looking for three men and three women. Performances are January 15-22, 2012. Everyone interested is encouraged to try out. 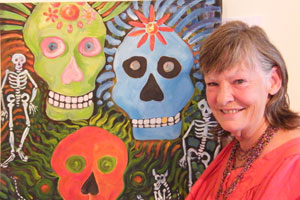 The Ajijic Society of the Arts “Soul of Mexico” exhibition turned out to be a colorful one. In the photo to the left, painter Jeanne Greene stands in front of her contribution to the show.

Tsalka currently resides in Stockholm, Sweden, where he teaches at one of the world’s finest music schools. Last week he performed to great acclaim at the International Cervantino Festival in Guanajuato. The program at Lakeside will include piano and harpsichord numbers by Bach, Beethoven, Chopin and Liszt.

He will also offer master classes on Saturday, November 5. These will be open to the public for a 100-peso admission fee.

Tickets for the concert are 300 pesos, with VIP tickets for 500 pesos. VIP tickets include reserved, premium seating at the auditorium and a gala reception at the lovely home of Bonnie and Ted Newman after the concert. Tickets are on sale at the Lake Chapala Society, the Auditorium, Diane Pearl’s Colecciones and Charter Club Tours. All proceeds will go to the renovation of the auditorium.

Artists at the Fair

Local  painters who got their start in the Neill James Children’s Art Program have been invited to exhibit and sell their works during the 10th Feria Maestros del Arte,  (Friday, Saturday and Sunday, November 16-20 at Club Yates de Chapala).