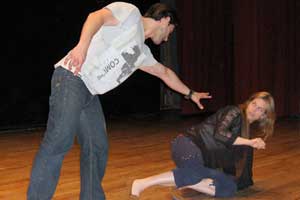 The play spans 25 years of life of two mail order brides and their deranged and scarred husbands, set in the harsh environment of Wyoming during the late 1800s. It offers an insight into what is most valuable in our lives by embracing the ups and downs of life and sheds light on how we can so easily go astray or chase dreams trying to find what can fulfill us. The fast-paced dark comedy makes for a thrilling roller-coaster ride for the audience.

Playing a principal character in the production is Nicholas Razo, originally from San Nicolas de Ibarra just east of Chapala. He moved to the United States with his family when he was 11 years old. He’s thrilled to be appearing in a play so close to where he was born.

Tickets are 200 pesos each and on sale at Diane Pearl’s and the auditorium. Part of the proceeds will go to benefit the Auditorium Upgrade Project.

Tickets for the first Music Appreciation Society (MAS) event of the season go on sale on November 1.

The Blas Galindo Orchestra will perform Tuesday, November 15, 7:30 p.m. at Auditorio de la Ribera del Lago. Tickets will be sold at the Lake Chapala Society Tickets, Etc. booth each day from 10 a.m. to noon for 300 pesos each.

The 30-piece orchestra will feature the “Andaluz Concerto” by Joaquin Rodrigo. For further information contact Kathleen Phelps at 766-0010 or check the website at www.masajijic.com.

The Russian State Ballet Mari El will bring “The Nutcracker” to Ajijic on Tuesday, November 11, 7:30 p.m. at Auditorio de la Ribera del Lago in La Floresta. The company is part of the Opera and Ballet Theater Sapaev and features more than 30 artists on stage.

Tickets for 500 pesos each can be purchased at Tony’s Plus Restaurant, Salvador’s Restaurant, Diane Pearl’s and Auditorio de la Ribera del Lago.

Veronica Navarro and Jay Koppelman, owners of the Studio 18 gallery (Colon 18, Ajijic), open an exhibit with the theme “Death Goes to Hollywood” on Wednesday, November 2, 4-7 p.m.

Organized by Victor Alcazar, the exhibit will feature original work by talented artists of the Lake Chapala area and Art Park Ajijic. Patrons will be able to see paintings, photography, altars and a dance performance, all representing the Day of the Dead. Refreshments will be served. The work will remain mounted for one week. The telephone number is 766-3745.

The exhibit is being held in conjunction with the musical revue “The Senior Class” and will continue for the duration of the show. The dates are November 3-5 and November 10-12.

Enjoy opening night nibbles, a cash bar and a raffle. Go for the art and stay for the show.

A donation from the proceeds of the raffle will be made to the Auditorium Improvement Fund. 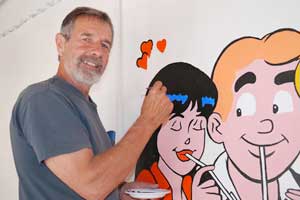 Artist Dan Noll (photo left) puts the finishing touches on Veronica and Archie on the wall of 60’s In Paradise, a breakfast and lunch restaurant in Ajijic. Noll, retired from the construction business in San Diego, now has a studio in Riberas del Pilar where he holds art classes and workshops. On Calle Hidalgo near the Ajijic plaza, 60’s In Paradise recently re-opened with the menu of sirloin burgers and milk shakes, but now also offers Lite Menu for Atkins, Weight Watchers and HCG. See  http://60paradise.com for more info.

Storytellers #3 is coming up at the Lake Chapala Society on Tuesday, November 8, 4-6 p.m.

Fans of local writers are turning up for these early evening gatherings, having a glass of wine and enjoying the original stories. Many see the events as soothing pre-dinner entertainment.

Any donations will help to expand the Jim Collums Education Fund.

Admission is free. Your donations go to help Mexican children stay in school. Show up. It’s fun and really helps the community.

Have a laugh (or two) 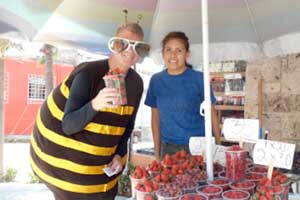 You’ll see Russell Mack as an emissary from the local honey bee society. Don Chaloner reminds us that life gets better as we become “vintage.” Patteye Simpson shares her new take on an old song about life “On Lake Chapala.” And David McIntosh introduces us to a local resident whom he has honored in his lusty original poem “Mexicali Rose” (not your usual poetry reading).

The play is filled with many of Lakeside’s most talented and favorite players: Christa Halby, Lee Hitchcock, Alexis Hoff, Roger Larson, Jayme Littlejohn and Lalo Muñoz.

Rafael Buccio and Eleanor Stromberg have put together the music and half the town is working backstage for this enticing blend of dance, comedy skits and songs.

Tickets for 200 pesos go on sale next week at the Lake Chapala Society, Diane Pearl’s, Charter Club and the Auditorium office.

Director Betty Lloyd-Robinson is looking for seven women and three men. Performances will be November 18, 19 and 20.

For additional information call the director at 765-3262 or email This email address is being protected from spambots. You need JavaScript enabled to view it..