Another year has wound down and you might be thinking all you have for it is another age spot. But medical science is at it again, this time filling retirees with the crazy idea that many of us living today could live to be 100 years old or more (without even giving us a chance to get a second opinion). 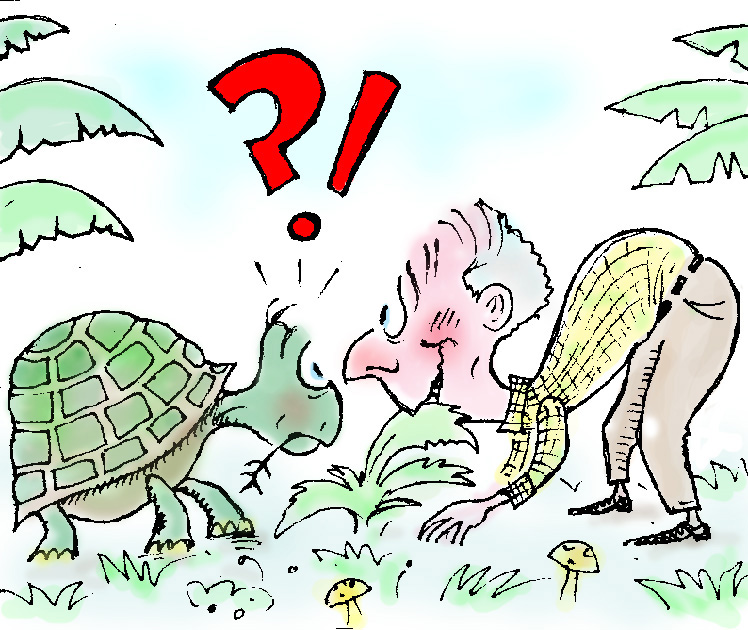 According to a recent federal health study in the United States, the number of Americans age 100 and older still living today is up by 44 percent since 2000.  This means you and I have a pretty high chance of becoming a centenarian. It wasn’t that long ago when our stooped, asthmatic Victorian forbears seldom lived past age 40. (And who could blame them, given the lack of indoor plumbing?)  And what about Australopithecus? If he made it to 23, the pandemonium on the savanna would go on for weeks.

The real question is: How do you know if you’re going to live to be 100.  You’re following the standards set by Darwin’s turtles as you move to your 100s: Eating organic mushrooms and other things you find only on the forest floor; keep a slow, steady course, never make a sudden move; and duck inside at the first sign of danger. I think Darwin also wrote a treatise on the turtles’ clever practice of never leaving their housing at all. (Don’t quote me on this.)

The answer might be with the companies advertising all over TV that will trace your ancestry. Or the other companies that will analyze your DNA and track it thousands of years back to the time when females began domesticating males.

A cousin of mine, who should otherwise have been looking for a steady job, did one of these family tree researches and sent me a copy of the results – fleshing in a many-peopled Tasca ancestry back to its ancient roots. The thing about the ancestry tree that caught my attention were the ages of my known and unknown kin when they passed on. I couldn’t help but notice that Uncle Rodrigo, whom I have been told was an insomniac like me, died at age 62 (If his insomnia was as bad as mine, he’s probably still awake in the cemetery listening to people at his grave saying, “He would have loved this view of the creek.” So that was a first clue.

Further along the tree trunk, two other uncles on my father’s side died at around the same age as Uncle Rodrigo – great uncle Gabriotto at 60 and his son at 63 who smoked Camels early in his life, as I did. These are not optimistic predictors for me, because we’re talking about real people, not some little chromosomal dollop of amino acids.

A moment later, I also found that my Uncle Nofrio, on my mother’s side, died at age 46. I used to laugh at him as a child because he could balance a cane on his nose, something I can also do, giving me possibly the same neurophysiology (and definitely, like him, fewer party invitations). Two hundred years back we had two relatives who died of “natural causes” at age 28. (Granted, they were related to the Borgias, but who knows.)

I’m thinking when you average out uncles from my father’s side with Uncle Nofrio’s anemic 46 on my mother’s side, and the two relatives who went at 28 in Italy, I calculated that these genes were still in play today, and at my current age I could be gone by next Halloween. The good news is I’ll miss the cohetes.

And as far as DNA analysis is concerned, if you decide to try it, you could find out, if you’re a Frenchman, say, that you are really 65 percent Russian and that your French accent is fake. Worse, these analyses can also tell you what devilish nucleotides are secretly hiding in the recesses of your DNA waiting to take you out at an early age. (Nucleotides are made up of phosphates, nitrogen groups, sugar combinations and polenta, so they’re pretty accurate.)  And this information can ruin that cruise you were planning next year.

So what have I learned from this Gene Rummy? I learned that pizzas with pepperoni or without pepperoni, real ice cream, non-dairy ice cream, ice cream made from corn starch and Splenda, pilates every morning – none of these matter one whit, because my body has a pre-existing plan of its own, and is laughing over all the money I wasted on antioxidants, which apparently could never anti all the oxidants my genes require me to anti.

Trust me here.  You don’t want to know. Just let your life play out in ignorance and bliss.  Too much information can hasten your demise. Have a happy, healthy new year.