Lately, I have found myself slumped over my laptop longing for the good old days when a handful of friends could get together and kibitz at someone’s home or a local bistro just to fill up a lazy afternoon and empty a few tumblers. 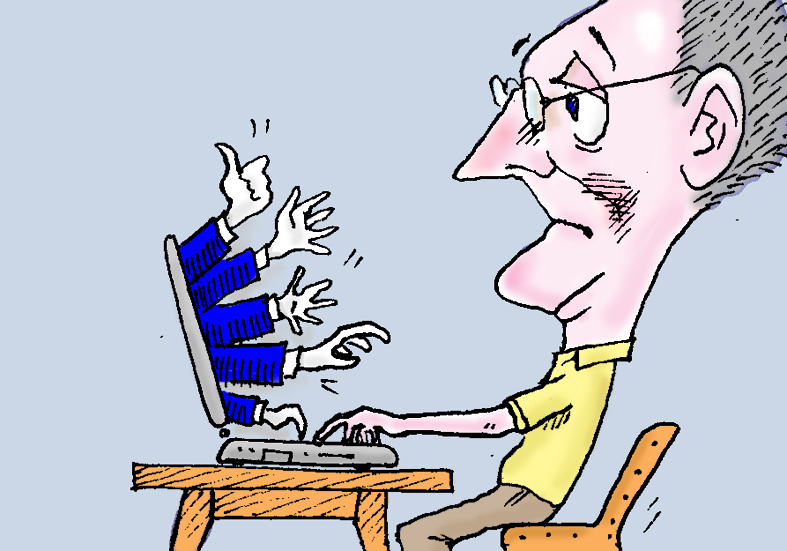 Such events have disappeared with the coming of Facebook and other social networking sites, which allow you to reach out to friends every day without ever catching any of their airborne communicable diseases. That seems to be the only advantage.

I became a Facebook member purely for the neighborliness of it all. Like chatting over the fence to find out why your grass looks like an artillery corps has retreated over it and his looks like astroturf. Within three weeks I had 227 new friends, 219 of whom I’d never met. And two or three only spoke Farsi.

I found that whenever anyone on Facebook asked me if I would accept them as a friend, I always did. I accept everyone, because it seems like the polite thing to do. Now, in real life, people don’t normally walk up to you and say, “Would you be my friend.” One would, in such a case, immediately suspect financial trouble and plan a luncheon, time and place to be determined at a later date, to be determined.

He informed everyone that he’d just begun woodworking classes and he asked Susan Rollicker to join him. In the same message, he asked me if I’d like to be friends with Susan Rollicker (who appears from her photo to be three years old). So not to offend, I agreed to be friends with Susan Rollicker, even though I don’t know her or Vincent Reebee. Three-year-old Susan’s response to Vincent’s woodworking invitation was, “Are you the Vincent who sent photos of Pamela Deiner’s garden?” (Clearly, Susan isn’t sure who Vincent is either – and, at three years old, is understandably wary of the invitation.)

Susan then asked me if I’d like to be friends with Pamela Deiner and accept Pamela’s Group Invitation to join 42 others from around the world who are remembering and listening to Little Anthony and the Imperials. Their invitation greeting was: “Hey, Ed, Shimmy-Shimmy Koko Bop, Shimmy-Shimmy Bop!”

Again, unable to disappoint anyone, I agreed. The only other Facebook option one has for these invitations is a terribly discourteous “Ignore” option – which, if applied, could send someone like Vincent Reebee over the edge. I think it’s high time Facebook added more useful options which can serve as amiable “maybes.” Such as “Pleasure to Meet You. Up to My Ears in Friends Right Now. Click Back Next Month.” Hurts no one’s feelings and gives you a chance to find out who Vincent Reebe really is, and, more importantly, whether or not you owe him money.

This takes me to my real point. Recently, it has been reported that 50 million Facebook members had their user data stolen by a company called Cambridge Analytica. Now, given all that I’ve mentioned above, I’m wondering who they are going to get to sift through billions of gigabytes of data. Does the photo of the pet dog with the pillow on his head have some worthwhile voting info on this member? Do 32 photos of another masked member in snorkling gear who vacationed with a friend named Pete hide anything? Does Samantha thinking food stamp recipients should only be able to buy tofu hint of nutcase conservatism? And what about Niel’s Farmland game mysteriously hacked by a gal named Pochahontas?   All this needs to be checked to the magnitude of 50 million Facebook users.

The person at Cambridge Analytica responsible for this work, who may yet wind up in jail, might find that while incarcerated you have no choice but to find real friends, romantic or otherwise.